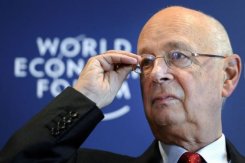 Economic and political elites meeting this week at the Swiss resort of Davos will be asked to urgently find ways to reform a capitalist system that has been described as "outdated and crumbling."

"We have a general morality gap, we are over-leveraged, we have neglected to invest in the future, we have undermined social coherence, and we are in danger of completely losing the confidence of future generations," said Klaus Schwab, host and founder of the annual World Economic Forum.

"Solving problems in the context of outdated and crumbling models will only dig us deeper into the hole.

"We are in an era of profound change that urgently requires new ways of thinking instead of more business-as-usual," the 73-year-old said, adding that "capitalism in its current form, has no place in the world around us."

Some 1,600 economic and political leaders, including 40 heads of states and governments, will be asked to come up with new ideas as they converge at eastern Switzerland's chic ski station for the 42nd edition of the five-day World Economic Forum which opens Wednesday.

The eurozone's failure to get a grip on its debt crisis and the spectre this is casting over the global economy will dominate discussions.

"The main issue would be the preoccupation with the global economy. There will be relatively less conversation about social responsibility and environment issues -- those tend to come to the fore when the economy is doing well," John Quelch, dean of the China European International Business School, told AFP.