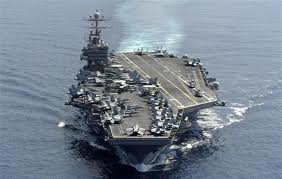 (Reuters) - A U.S. aircraft carrier sailed through the Strait of Hormuz and into the Gulf without incident on Sunday, a day after Iran backed away from an earlier threat to take action if an American carrier returned to the strategic waterway.

The carrier USS Abraham Lincoln completed a "regular and routine" passage through the strait, a critical gateway for the region's oil exports, "as previously scheduled and without incident," said Lieutenant Rebecca Rebarich, a spokeswoman for the U.S. Fifth Fleet.

The Lincoln, accompanied by strike group of warships, was the first U.S. aircraft carrier to enter the Gulf since late December and was on a routine rotation to replace the outgoing USS John C. Stennis.

The departure of the Stennis prompted Iranian army chief Ataollah Salehi to threaten action if the carrier passed back into the Gulf.

"I recommend and emphasize to the American carrier not to return to the Persian Gulf. ... We are not in the habit of warning more than once," he said.

The threat led to a round of escalating rhetoric between the two sides that spooked oil markets and raised the specter of a military confrontation between Iran and the United States.