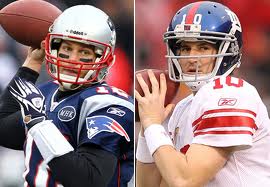 Hey, Indianapolis. A Manning will be playing in your Super Bowl, after all.

No, not that one.

It'll be Eli Manning leading the New York Giants to a Super Bowl rematch against the New England Patriots - and this time on older brother Peyton's home field.

"It doesn't matter to me where you're playing it or the fact that it's in Indianapolis," Eli Manning said. "I'm just excited about being in one."

And if the Giants can pull this one off, Eli will have sibling bragging rights with one more Super Bowl ring than Peyton, who missed this season for the Colts after having neck surgery.

It sure won't be easy for the Giants, though. Four years after New York stunned previously undefeated New England in the Arizona desert, they'll play a Super sequel.

Eli vs. Brady. Coughlin vs. Belichick. The Giants vs. the Patriots.