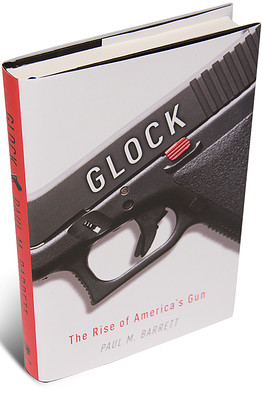 In 1980, Gaston Glock was the manager of a car-radiator factory just outside Vienna. At home, he ran a side business in his garage, making knives and bayonets for the Austrian army. He lived in a comfortable though not overly prosperous way, all but unknown beyond his corner of Austria. He knew next to nothing about firearms. Less than 20 years later, he was the world's leading manufacturer of handguns, and the business born in his garage had annual revenues of more than $100 million.

If this improbable success story involved nothing more than technical innovation, Mr. Glock's ascent would no doubt still make for a compelling tale. But, as Paul M. Barrett reveals in "Glock: The Rise of America's Gun," there is more to the story. Much more, including political shenanigans, corporate corruption and an attempted assassination.

Mr. Barrett, a former writer for The Wall Street Journal and now an editor at Bloomberg Businessweek, brings a financial reporter's eye to the peculiar enterprise of making and selling guns. Like most successful businesses, Mr. Glock's benefited from good timing and good luck.

'Huge problem': Passengers are bringing a record number of guns to the airport, TSA says

Robot Dogs Now Have Assault Rifles Mounted On Their Backs