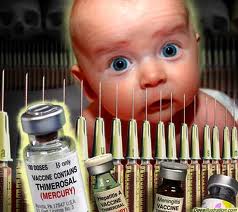 Once again the tyrannical claws of the medical industrial complex, supported by big brother government, have grazed the flesh of an intelligent, educated mother that has refused to bow down to the lies of the vaccine agenda.

Rachel Garmon, a resident of the Centre County area of Pennsylvania, recently took her 2½ year old son to an appointment with a new pediatrician. Mrs. Garmon states in her recent interview with Alex Jones that her visit with the doctor was going well. The pediatrician even stated that the boy looked very healthy. This was of course until the good doc found out that Rachel had never vaccinated her son.

Suddenly, the visit took a turn for the worse as the pediatrician, classically trained in the heretical arts of poisoning young children in the name of health, began to attempt the indoctrination of vaccination into this wayward mother. Rachel however, stood her ground and explained to the doctor that she had “strong convictions against vaccinating (her) son and he was not going to get any shots.”

1 Comments in Response to Doctor Calls Police, Child Services on Mother Who Refuses To Vaccinate Son

**NOTICE TO ALL HEALTH CARE PRACTITIONERS**YOUR FUTURE POSSIBLE PARTICIPATION IN A MANDATORY VACCINATION PROGRAM WILL BE ILLEGAL. IF IMPLEMENTED, IT WILL VIOLATE THE CONVENTIONS OF VARIOUS CONSTITUTIONS, CHARTERS, AND OATHS (DOCTORS), INCLUDED INTERNATIONAL LAW. IF YOU PARTICIPATE IN A COMING MANDATORY VACCINATION PROGRAM, YOU COULD BE LOGGED FOR EVENTUAL LEGAL PROSECUTION.DO NOT ASSUME THAT THE LEGAL PROTECTIONS
AFFORDED YOU VIA AN 'INTERNATIONAL
EMERGENCY', 'MARTIAL LAW' OR 'WAR TIMES ACT'
WILL PROTECT YOU. THE DOCTOR'S UNDER THE
NAZI REGIME USED THE SAME JUSTIFICATIONS
UNDER A WAR TIME 'EMERGENCY.'
THEY WERE THE FIRST ONES TO BE TRIED AND
PROSECUTED DURING THE NUREMBURG TRIALS.
RESPECT THE FREE WILL OF THE INDIVIDUAL NOT
TO BE FORCE VACCINATED. THANK YOU.
The following pages are a random chronology of historical events
demonstrating why NO ONE should be force vaccinated.
(PLEASE COPY THIS DOCUMENT TO ALL INTERESTED)
20 OF THE 23 DEFENDENTS WERE DOCTORS....
7 WERE ACQUITTED...
9 RECEIVED SENTENCES FROM 10 YEARS TO
LIFE...
7 WERE GIVEN THE DEATH SENTENCE...
EVEN THOUGH THIS WAS DIRECTED UNDER THE AUSPICES OF A PHARMACEUTICAL TRIAL, THE
DOCTORS AND NURSES WERE THE FIRST TO BE CHARGED. NO MEDICAL PRACTITIONER
WOULD DELIBERATELY BOTCH A VACCINATION TRIAL. THINK ABOUT IT.
Nigeria's population growth curves were too aggressive for various
population agencies...
"There have therefore been strong warnings from population
agencies for Nigeria to decrease the rate of population growth
through vigorous family planning programs, 'otherwise the future
generations of Nigeria would not have enough food, housing,
education, health services and jobs".
"DO NOT TAKE ANY VACCINATIONS.
This is the standard deceptive way you are
given the Establishment’s Biological
Warfare infections.." Dr. William D. Kelly
"A reasonable estimate for an industrialized world
society at the present North American material
standard of living would be 1 billion. At the more
frugal European standard of living, 2 to 3 billion
would be possible."
- United Nations, Global Biodiversity Assessment
“A total population of 250-300 million people, a 95%
decline from present levels, would be ideal.”
- Ted Turner, founder of CNN and major UN donor

“Isn’t the only hope for the planet that the
industrialized civilizations collapse? Isn’t it our
responsibility to bring that about?”
- Maurice Strong, founder of the UN
Environment Programme
Wayne Madsen on Russia Today reports on the uselessness of any standard
vaccinations due to H1N1's high mutation rate, and the plan for Big Pharma to
profit from this...
News Reporter - "An American investigative journalist who claims that swine flu strains
have been engineered in two universities in the US and Canada, says they've been
deliberately designed to resist vaccines. Wayne Madsen also says that his also so called
'nightmare scenario' in which swine flu could mutate with bird flu has been suppressed by
the World Health Organization for politcal reasons. He joins me now, live from
Washington..
Wayne, what exactly is your accusation then? Are you saying that Swine flu is actually
manufactured, or why on earth would anyone want to do that, and why, and who?"
Wayne – "Well it is a variety of reasons for that. One is that it would increase
sales for new vaccine manufacturers in the pharmaceutical industry. The other
would be to just create this world wide crisis. We know a lot of people thrive
economically on crisis situations. I reported in May, after speaking to people who are
researching, these are scientists researching this new hybrid flu – that it was basically
engineered from genetic material taken from a dead inuit women who died from the 1918
pandemic, also known as the Spanish Flu. Now one reasearcher told me after
investigating this particular flu, this is a Subtype A influenza. It contains a enzyme called
a polymerase, that exists in all Subtype A influenza's. It was determined that this
particular flu was gene spliced from two forms of human flu, two forms of swine flu, and
one form of human flu. The problem is when they looked at the molecular clock of
this enzyme is that it was rapidly mutating in humans. The problem of that is
of course, any new mutated version of this virus would be immune to any
vaccine already created to handle the previous type of virus..."
“… the resultant ideal sustainable population is hence
more than 500 million but less than one billion.”
- Club of Rome, Goals for Mankind
Adrian Gibbs a leading virologist, and former co-developer of tamiflu
has studied germ evolution for four decades supported the hypothesis
that the H1N1's high lysine content indicated laboratory creation. His
paper was sumarily dismissed by the WHO, and a scientific body of
experts.
CONCLUSIONS...
NO MATTER HOW H1N1 CAME INTO EXISTENCE, OR HOW BENIGN OR DANGEROUS
OR PROFITABLE THE COMING VACCINE(S) WILL BE - IT IS THE RIGHT OF THE
INDIVIDUAL TO MAINTAIN THEIR OWN RIGHT TO SELF-TREATMENT.
THE NUREMBURG CODE SECTION 1 STATES.
" 1.The voluntary consent of the human subject is absolutely
essential. This means that the person involved should have legal
capacity to give consent; should be so situated as to be able to
exercise free power of choice, without the intervention of any
element of force, fraud, deceit, duress, over-reaching, or other
ulterior form of constraint or coercion; and should have sufficient
knowledge and comprehension of the elements of the subject matter
involved as to enable him to make an understanding and
enlightened decision. This latter element requires that before the
acceptance of an affirmative decision by the experimental subject
there should be made known to him the nature, duration, and
purpose of the experiment; the method and means by which it is to
be conducted; all inconveniences and hazards reasonable to be
expected; and the effects upon his health or person which may
possibly come from his participation in the experiment.
NUREMBURG TRIAL DOCTORS LOST THEIR LIVES, AND MANY OF THEM SPENT LIFE
IN PRISON - BECAUSE THEY VIOLATED THIS ONE SIMPLE RULE.
A DOCTOR'S HIPPOCRATIC OATH IS CLEAR – "DOCTOR'S ARE NOT TO PLAY GOD!"
THE CIA PAID $750,000 OUT OF COURT BECAUSE OF A FORCED 'STATE OF THE ART' MEDICAL
TREATMENT BEING GIVEN UNDER DR. CAMERON DURING THE MK-ULTRA TRIALS. THEY
ATTEMPTED TO GET OUT OF PAYING BY HOPING THE PLANTIFFS WOULD DIE. THIS WAS
COVERED IN SOME DETAIL IN GORDON THOMAS'S BOOK "JOURNEY INTO MADNESS." EVEN
THE MOST POWERFUL INTELLIGENCE AGENCY IN THE WORLD ENDED UP PAYING FOR THEIR
ACTIONS.
DR. CAMERON BROKE HIS OATH, AND THE NUREMBURG CODE IN THE LATE 1950'S BY
FORCED INJECTIONS AND APPLYING ELECTRIC SHOCK TO HIS PATIENTS. ONE OF HIS
PATIENTS HAPPENED TO BE A DOCTOR (MORROW) AND WOULD EVENTUALLY MOUNT A
LAWSUIT FOR FORCED INJECTIONS / ELECTROSHOCK THERAPY AGAINST HER WILLING
CONSENT.
THE CIA AFTER ENDLESS ATTEMPTS AT A DIVERSION PAID IN 1988. ALMOST 40 YEARS LATER.