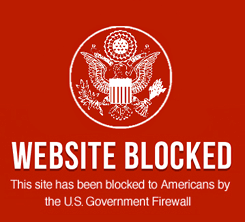 I posted earlier about the provisions of the New Years Eve-signed National Defense Authorization Act (NDAA) a/k/a the “Homeland Battlefield Bill,” allowing the President of the U.S., at his or her sole discretion, to order the indefinite detention of any U.S. citizen, with no burden of proof whatsoever, and no recourse for the detainee—in fact making the President judge, jury, and jailer.

Congress now proposes to provide U.S. bureaucrats the power to block any internet site or provider, with no due process or recourse available to the blocked sites. A group of distinguished law professors has gone through the proposed legislation, Stop Online Piracy Act (SOPA), also known as House Bill 3261, and advises that it would:

Allow the government to block internet access to any website that ‘facilitated’ copyright or trademark infringement—a term that the Department of Justice interprets to mean nothing more than having a link on a web page to another site that turns out to be infringing.

The professors go on to warn:

By failing to guarantee the challenged web sites notice or an opportunity to be heard in court before their sites are shut down, SOPA represents the most ill-advised and destructive intellectual property legislation in recent memory.