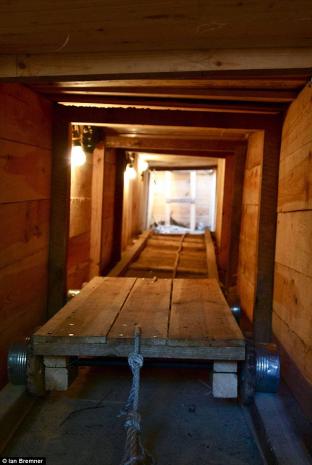 It has lain hidden for nearly 70 years and looks, to the untrained eye, like a building site. But this insignificant tunnel opening in the soft sand of western Poland represents one of the greatest examples of British wartime heroism. And the sensational story became the Hollywood classic, The Great Escape, starring Steve McQueen.

We are standing in the notorious PoW camp Stalag Luft III, built at the height of the Third Reich, 100 miles east of Berlin. Ten thousand prisoners were kept under German guns here on a 60-acre site ringed with a  double barbed-wire fence and watchtowers.

They slept in barrack huts raised off the ground so guards could spot potential tunnellers, but the Germans did not count on the audacity of British Spitfire pilot Squadron Leader Roger Bushell, played by Sir Richard Attenborough in the 1963 film. He was interned at the camp in March 1943. With him were about 2,000 other RAF officers, many of whom were seasoned escapers from other camps, with skills in tunnelling, forgery and manufacturing. Frank Stone, seated, with Dr Tony Pollard on the site of George

From them Bushell hand-picked a team for his ambitious plan: to dig their way out of captivity.

Three tunnels nicknamed Tom, Dick and Harry were constructed 30ft underground using homemade tools. While Tom was discovered and destroyed by the Germans, Dick was used for storage.

The third tunnel, Harry, became the stuff of folklore on the night of March 24, 1944, when Allied prisoners gathered in hut 104 before crawling along the 100ft tunnel to a brief taste of freedom. Only three escaped; 73 were rounded up by the Germans and 50 were summarily executed.

Few could have blamed their devastated comrades for sitting out the remainder of the war. Yet far from being dispirited, a few men began work on a fourth tunnel nicknamed ‘George’, which was kept so secret that only a handful of prisoners knew about it.

Now, for the first time in 66 years, the archaeologists have pinpointed the entrance shaft to Harry after compiling a map of the camp using aerial photography.

Incredibly, George has just been uncovered after a team of engineers, archaeologists and historians excavated the site, a project filmed for a Channel 4 documentary Digging The Great Escape.