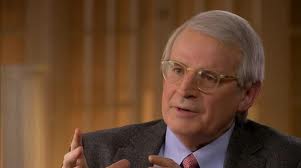 David Stockman on Crony Capitalism from BillMoyers.com on Vimeo.

BILL MOYERS: Welcome. This week we’re continuing our exploration of Winner-Take-All Politics: How Washington Made the Rich Richer and Turned its Back on the Middle Class. If you missed our first installment, you’ll find it at our website, BillMoyers.com.

Now this is only the second broadcast of our new series, yet we’ve already made our choice for the best headline of the month. Here it is:

Behind that headline is a tangled web.

Bill Daley replaced Obama’s first chief of staff, Rahm Emanuel, who once worked for a Wall Street firm where he was paid a reported $18.5 million in less than three years.

The new chief of staff, Jack Lew, comes from Obama’s Office of Management and Budget, where he replaced Peter Orszag, who now works as vice chairman for global banking at the giant conglomerate Citigroup. Still following me?

It’s startling the number of high-ranking Obama officials who have spun through the revolving door between the White House and the sacred halls of investment banking.

But remember, it was Bush and Cheney’s cronies in big business who helped walk us right into the blast furnace of financial meltdown. Then they rushed to save the banks with taxpayer money.