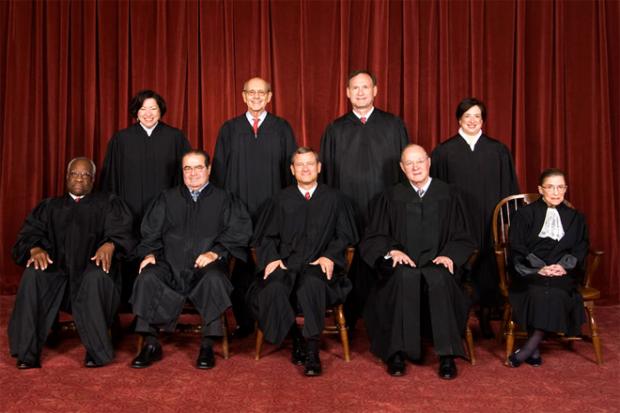 The Supreme Court said Monday that law enforcement authorities might need a probable-cause warrant from a judge to affix a GPS device to a vehicle and monitor its every move — but the justices did not say that a warrant was needed in all cases.

The convoluted decision (.pdf) in what is arguably the biggest Fourth Amendment case in the computer age, rejected the Obama administration’s position that attaching a GPS device to a vehicle was not a search. The government had told the high court that it could even affix GPS devices on the vehicles of all members of the Supreme Court, without a warrant.

“We hold that the government’s installation of a GPS device on a target’s vehicle, and its use of that device to monitor the vehicle’s movements, constitutes a ‘search,’” Justice Antonin Scalia wrote for the five-justice majority. The majority declined to say whether that search was unreasonable and required a warrant.

All nine justices, however, agreed to toss out the life sentence of a District of Columbia drug dealer who was the subject of a warrantless, 28-day surveillance via GPS.

Four justices in a minority opinion said that the prolonged GPS surveillance in this case amounted to a search needing a warrant. But the minority opinion was silent on whether GPS monitoring for shorter periods would require one.

Why the hell does anyone even entertain the notion that there is anything in the world that gives any so-called "law enforcement" entity the right to do anything that isn't codified by statute or allowable to the average citizen? The self anointed misfits and thugs of pop culture sociality, who fancy themselves above the law and the people who pay their damn salaries, keeping them from otherwise contaminating a somewhat questionable workforce, have absolutely no rights or privileges that aren't granted them by the people they serve:  In spite of their spurious view of reality and their personal PLACE in it, they are subject to the law(s) of the land! They are PUBLIC SERVANTS - Emphasis is on SERVANTS!

Is this the Society You Want?