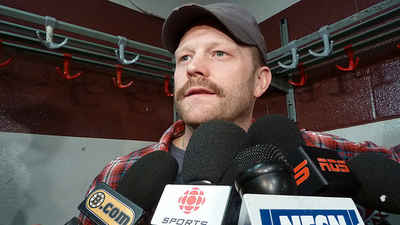 The Boston Bruins made a trip to the White House on Monday afternoon to celebrate their Stanley Cup championship. However, the man perhaps most responsible for that Cup title, Tim Thomas, was absent.

The defending Vezina Trophy and Conn Smythe winner released a statement on Facebook regarding his absence on Monday evening.

It reads in its entirety below.

"I believe the Federal government has grown out of control, threatening the Rights, Liberties, and Property of the People.

This is being done at the Executive, Legislative, and Judicial level. This is in direct opposition to the Constitution and the Founding Fathers vision for the Federal government.

Because I believe this, today I exercised my right as a Free Citizen, and did not visit the White House. This was not about politics or party, as in my opinion both parties are responsible for the situation we are in as a country. This was about a choice I had to make as an INDIVIDUAL.

1 Comments in Response to Tim Thomas Releases Statement on White House Absence, Says Government 'Has Grown Out of Control*

That was nice to read.  I bet he was the only teammate who didn't feel the need to shower after leaving the White House.