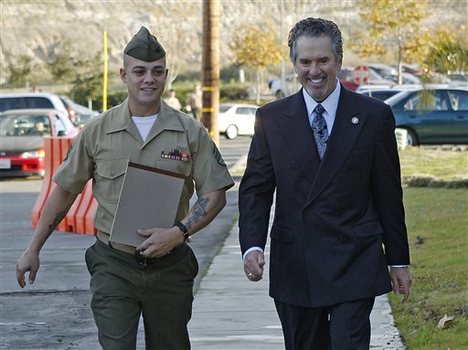 CAMP PENDLETON, California –  Military prosecutors worked for more than six years to bring Marine Staff Sgt. Frank Wuterich to trial on manslaughter charges that could have sent him away to prison for life.

But only weeks after the long-awaited trial started, they offered Wuterich a deal that stopped the proceedings and could mean little to no jail time for the squad leader who ordered his men to "shoot first, ask questions later," resulting in one of the Iraq War's worst attacks on civilians by U.S. troops.

The 31-year-old Marine, who was originally accused of unpremeditated murder, pleaded guilty Monday to negligent dereliction of duty for leading the squad that killed 24 unarmed Iraqi civilians in the town of Haditha in 2005 during raids after a roadside bomb exploded, killing a fellow Marine and wounding two others.

Wuterich who was indicted in 19 of the 24 deaths now faces no more than three months in confinement.

It was a stunning outcome for the last defendant in the case once compared to the My Lai massacre in Vietnam. The seven other Marines initially charged were exonerated or had their cases dropped.

War sucks. If you have not faced death, death whereby a child or adult can carry explosives or operate guns, well, you should not judge this man. You know, walk a mile in his shoes....