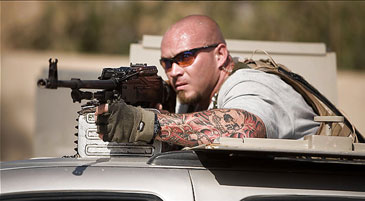 America’s troops may be returning home from Iraq, but we’re far from done paying the costs of war. In fact, at the same time that President Obama is reducing the number of troops in Iraq, he’s replacing them with military contractors at far greater expense to the taxpayer. In this way, the war on terror is privatized, the American economy is bled dry and the military-security industrial complex makes a killing — literally and figuratively speaking.

The war effort in Iraq, Afghanistan and Pakistan has already cost taxpayers more than $2 trillion and could go as high as $4.4 trillion before it’s all over. At least $31 billion (and as much as $60 billion or more) of that $2 trillion was lost to waste and fraud by military contractors, who do everything from janitorial and food service work to construction, security and intelligence — jobs that used to be handled by the military.

Over the past two decades, America has become increasingly dependent on military contractors in order to carry out military operations abroad.

According to the Commission on Wartime Contracting in Iraq and Afghanistan, the United States can no longer conduct large or sustained military operations or respond to major disasters without heavy support from contractors. As a result, the U.S. employs at a minimum one contractor to support every soldier deployed to Afghanistan and Iraq. For those signing on for contractor work, many of whom are hired by private contracting firms after serving stints in the military, it is a lucrative, albeit dangerous, career path. Incredibly, while base pay for an American soldier hovers somewhere around $19,000 per year, contractors are reportedly pulling in between $150,000-$250,000 per year.