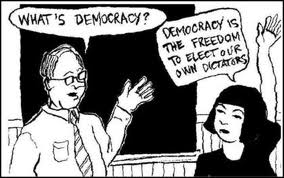 “The West is headed to dictatorship. It’s already happening. The merger of state and corporate power is by definition called fascism. I just mentioned the Defense Authorization Act. Before you had that you had the abrogation of the Constitution under Bush, with the Patriot Act, which Obama reinstated and made even tougher by signing this bill. When I say the merger of state and corporate powers, look at the $16.1 trillion that the Federal Reserve has funneled into businesses around the world. Whatever happened to that thing called capitalism? This is not capitalism; it’s fascism! The more societies break down and the bigger the screw-ups at the top, the harder they clamp down on the bottom. You see it going on around the world; they call it austerity measures. How about calling it enslavement?” – Gerald Celente, “Gerald Celente on Trend Forecasting and the Crisis of Western Civilization,” The Daily Bell, January 22, 2012.

“There is no doubt, in my view, that the elites practiced directed history in the 20th century, setting up wars and economic catastrophes designed to consolidate world government. But in the 21st century, with so many understanding and evaluating the mechanisms of the elites, this is a considerably harder trick to pull off.” – Anthony Wile, “Yes, The War for the Internet Has Begun,” The Daily Bell, January 21, 2012.

Al-Media, not Al-Qaeda, is the biggest threat to Western freedom and global security.

The goal of Al-Media is to destroy the United States of America, erase the traditions of law and liberty in the West, and sell to the West a technological slave system disguised as a “new world order.”

The information terrorists in Al-Media, aka the pundits, news anchors, and journalists, concealed the real perpetrators of the 9/11 attacks from public view and directed the world on the false trail of Jihadi terrorists.

Are vaccine-hesitant conservatives REALLY behind the Delta surge?