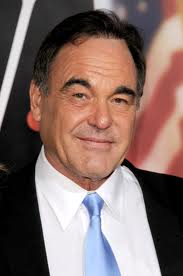 In this candid conversation with Rock Cellar Magazine, Oliver Stone discusses On History, the new book he co-authored with Tariq Ali, the activist/intellectual who inspired Mick Jagger to write Street Fighting Man.

Rock Cellar Magazine:  What drew you to make The Doors?

Oliver Stone:  I had to.  Jim Morrison was a poete maudit of my generation. He was ignored by many people. And the music spoke eloquently to me, moved me.

When he died young, I was very distraught – as I was with Jack Kennedy. And I just thought that given this chance – coming off of Platoon and Born on the Fourth of July and Wall Street - I was given an opportunity, because the project was around for several years, and nobody had moved ahead with it.

I got a chance to write the script and do it, pretty much, with free form – the way I envisaged the songs being the driving force of the movie. The songs would tell the story of the movie. So a new form of craft was required. It was more like the early MTV concept, that you’d put the action into the song.