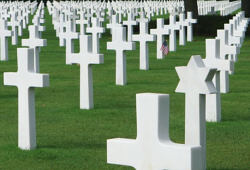 By Aaron Zelman (1946 - 2010) – Founder and Executive Director of
Jews for the Preservation of Firearms Ownership (JPFO).

What’s wrong with this picture?

A Florida city allows a Jewish menorah to be displayed in a public park — but forbids a nativity scene to be placed next to it. [i]

Seventh graders in a California school take an intensive three-week course on Islam — which includes praying to Allah and conducting a mock jihad — but are not allowed to study Christianity in school. [ii]

A library employee is fired for wearing a cross pendant to work, and a teacher’s aide is suspended for a year without pay for doing the same thing. [iii] Yet at the same time, in the name of "tolerance," workplaces allow Islamic crescents, Wiccan symbols, Stars of David, and other non-Christian religious signs.

Few people would have believed it 10 years ago — or even five — or even two or three years ago. But Christianity is in danger of becoming a scorned and despised religion in the United States.

The tide is being held back for the moment. The Florida city said the nativity scene could be placed at a different (although less prominent) public location, parents sued the California school district for its promotion of a religion, and judges ordered the fired and suspended employees to be re-instated.

Yet all is not well for Christians in America. Similar incidents are reported every day, and many don’t have happy outcomes for followers of Christ. Around the globe, things are worse. We know of at least three genocides within the last hundred years that have specifically targeted Christians. [iv] With militant Islam on the rise, and some 100 million Muslims worldwide supporting jihad against "infidels," times are dangerous indeed for Christians.

You might imagine Christianity can’t be threatened in the United States because it’s America’s majority faith. But there’s no assurance Christians will remain in the majority. And ironically, part of the reason Christianity is so threatened now is that it is the majority faith. It’s hard to imagine an employer walking up to a Jew and demanding, "Remove that star of David pendant," or approaching a Muslim and ordering him to take off a tie-tack in the shape of a crescent. The employer would be terrified of being accused of bigotry. But that same employer feels safe demanding removal of Christian symbols because Christianity, as the majority religion, is seen as the "oppressor" of other religions and cultures. (This phenomenon is similar to the way in which white males can be criticized in the workplace more safely than women or minorities.)