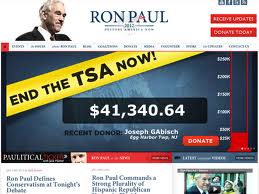 Ron Paul has long opposed the TSA and has campaigned for its abolishment for years. Following an episode on Monday that left his son, Sen. Rand Paul, stranded in a Nashville airport, the presidential hopeful is asking for help to finally end the TSA.

Early Monday, Kentucky Senator Rand Paul triggered a false alarm while passing through a Transportation Security Administration checkpoint on his way to Washington DC. As per TSA standards, the government-hired screeners on site asked the senator to submit to a personal pat-down. Rand Paul, however, had other plans. Senator Paul says he asked to be re-scanned. Shortly after 10 a.m., the senator’s Facebook page announced that he had been detained at the Nashville Airport by the TSA.

“The police state in this country is growing out of control. One of the ultimate embodiments of this is the TSA that gropes and grabs our children, our seniors and our loved ones and neighbors with disabilities.The TSA does all of this while doing nothing to keep us safe,” wrote the congressman. He added that, under his own “Plan to Restore America,” he aimed to save $1 trillion federal spending, a goal that would be reached in part by ending the TSA.