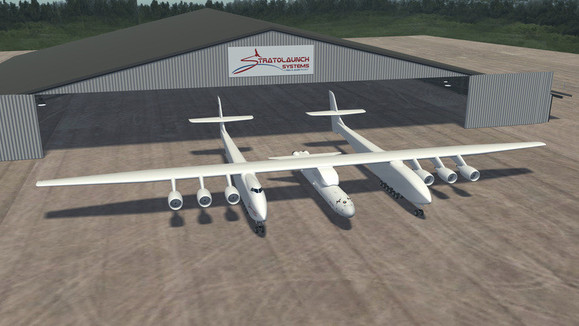 Seattle billionaire Paul Allen’s outsized ambitions are getting a boost with the Mojave Desert groundbreaking of a hangar facility to build the world’s largest airplane powered by six jet engines.

Huntsville, Ala.-based Stratolaunch Systems Inc., the new commercial space venture unveiled last month by Allen and aerospace pioneer Burt Rutan, will build the airplane to lift a rocket ship to a high altitude. Once there, the rocket ship would separate from the carrier aircraft, then engage its rocket engines for its climb into space.

The plane will be built at the Mojave Air & Space Port, where the venture, bankrolled by Allen, is starting work on a building that will house an 88,000-square-foot factory floor where carrier aircraft wing assemblies and associated parts will be built. It's slated to be finished later this year.

Later Stratolaunch will embark on constructing a 92,640-square-foot hangar. It will serve as the aircraft assembly and test facility and will include 20,250 square foot of office space. The hangar is expected to be ready by mid-2013.