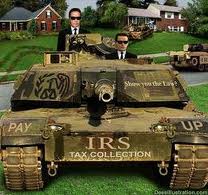 Rather than deal with the complexities of U.S. tax law, Americans living overseas are increasingly renouncing their citizenship in order to avoid paying their income taxes.
According to National Taxpayer Advocate Nina E. Olson, approximately 4,000 people gave up their citizenship from fiscal year 2005 to FY 2010. Renunciations increased sharply within the past three years, from 146 in FY 2008 to 1,534 in FY 2010. And during the first two quarters of FY 2011 alone, 1,024 Americans ditched their citizenship.
The advocate’s report cites two reasons for the renunciations. First, many taxpayers abroad say they are confused “by the complex legal and reporting requirements they face and are overwhelmed by the prospect of having to comply with them.”
Second, others have accused the Internal Revenue Service (IRS) of “bait and switch” tactics, telling Americans they can resolve their unpaid taxes under an “older voluntary disclosure programs with the promise of reduced penalties, only to find themselves subjected to steeper penalties.”