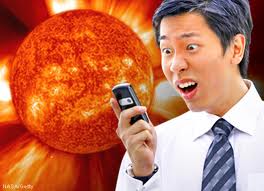 On Sunday, a massive explosion on the sun known as a solar flare sent an ejection of some of the sun's plasma hurtling toward earth at the ungodly speed of 1,000 kilometers...per second!

No need to worry about being hit by flying sun plasma though -- that will zoom right past Earth and race toward the edge of the solar system, according to Harlan Spence, principal investigator for the Cosmic Ray Telescope for the Effects of Radiation (CRaTER) instrument onboard NASA’s Lunar Reconnaissance Orbiter.

It's the ionizing-radiation that was also produced during the flare that hit Earth on Tuesday that is more of a cause for concern.

The radiation won't physically hurt those of us who are earthbound -- the Earth's magnetic field and its atmosphere provides an effective shield against that. But astronauts who are working on the International Space Station could be at risk.

"These particles move so fast that they can penetrate the walls of spacecraft, damage electronics and even pass through a spacesuit into a person's body," said Spence. "And when it moves through you, it can do grave damage to your cells and your DNA. That's why astronauts will try to go to a well shielded environment when one of these events occur."