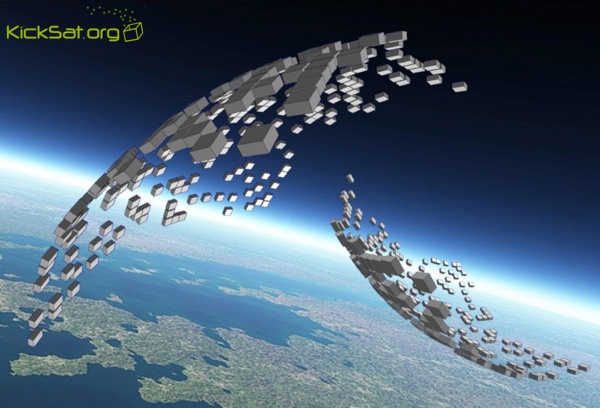 Would you like to have your own spacecraft in space?

I'm Zac Manchester, a graduate student in Aerospace Engineering at Cornell University. Over the last several years a few collaborators and I have designed, built, and tested a very tiny and inexpensive spacecraft called Sprite that can be built and launched into low Earth orbit for just a few hundred dollars each!

My goal is to bring down the huge cost of spaceflight, allowing anyone from a curious high school student or basement tinkerer to a professional scientist to explore what has until now been the exclusive realm of governments and large companies. By shrinking the spacecraft, we can fit more into a single launch slot and split the costs many ways. I want to make it easy enough and affordable enough for anyone to explore space.

You can find out more about the Sprite concept here:

And from the following articles:

Sprites are the size of a couple of postage stamps but have solar cells, a radio transceiver, and a microcontroller (tiny computer) with memory and sensors - many of the capabilities a bigger spacecraft would have, just scaled down. This first version can’t do much more than transmit its name and a few bits of data - think of it as a shrunken down Sputnik - but future versions could include any type of sensor that will fit, from thermometers to cameras.

KickSat is a CubeSat - a standardized small satellite that we can easily launch. It is designed to carry hundreds or even thousands of Sprites into space and deploy them in low Earth orbit. The Sprites will be housed inside KickSat in several spring-loaded stacks and held in place by a lid.  A radio signal transmitted from our ground station will command the lid to open, releasing the Sprites as free-flying spacecraft.

NASA 'going full force' to gear up for UFO study