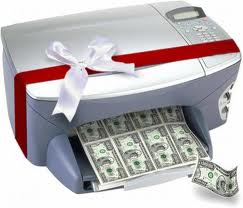 (Reuters) - The Federal Reserve has moved closer to embarking on a new round of its controversial money-pumping after the central bank and its chairman Ben Bernanke highlighted a grim outlook for the U.S. economy.

Bernanke on Wednesday opened the door a bit wider for the Fed to return to buying securities in the months ahead to buttress a weak recovery and keep inflation from slipping too far below its newly adopted 2-percent target.

"It sounds like the finger is on the trigger," said Thomas Simons, a money market economist at Jefferies & Co.

The Fed's announcement that it was unlikely to raise interest rates until at least late 2014, more than a year beyond its previous guidance, immediately pushed down Treasury bond yields and Bernanke's comments to the media raised expectations of a further round of so-called quantitative easing, or QE3.