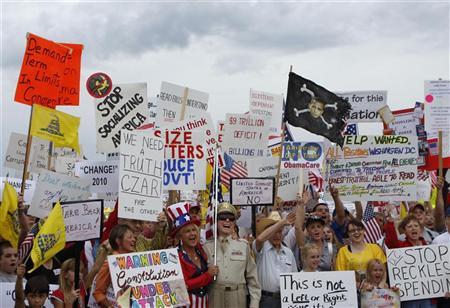 (Reuters) - Hundreds of miles and a vast ideological divide separate Cecily Friday from Tim Dake. But what they share is a passionate dislike and distrust of the American political elite. I caught up with Friday on a bitterly cold, rainy October night in Nashville. That same night state troopers had arrested 29 members of Occupy Nashville for violating a new curfew designed to end the occupation of Legislative Plaza.

They were there, the occupiers said, to protest income inequality, bank bailouts, and corporate involvement in American politics. "I have been waiting and waiting for years for people to come out onto the streets," said Friday, a former left-wing blogger, now a stay-at-home mom who has become a spokeswoman for the local Occupy movement. Slender, brown-haired, and efficient, Friday did not waste many words - she was needed elsewhere. "Now we're doing something and we're not going to stop."

When I asked why protesters felt compelled to occupy this public space instead of relying on civil society and nongovernmental organizations to make their case, Friday paused to warm her bright red fingers on a polystyrene cup of hot liquid that looked, but didn't taste, like coffee. "They have been around for a while, but apparently they haven't done enough," she said matter-of-factly. "Otherwise we wouldn't be here."

Worldwide Protests This Past Weekend the Corporate Media Won't Report