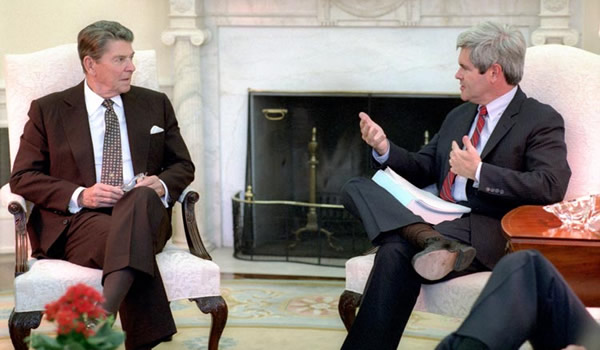 In the increasingly rough Republican campaign, no candidate has wrapped himself in the mantle of Ronald Reagan more often than Newt Gingrich. “I worked with President Reagan to change things in Washington,” “we helped defeat the Soviet empire,” and “I helped lead the effort to defeat Communism in the Congress” are typical claims by the former speaker of the House.

The claims are misleading at best. As a new member of Congress in the Reagan years — and I was an assistant secretary of state — Mr. Gingrich voted with the president regularly, but equally often spewed insulting rhetoric at Reagan, his top aides, and his policies to defeat Communism. Gingrich was voluble and certain in predicting that Reagan’s policies would fail, and in all of this he was dead wrong.

The fights over Reagan’s efforts to stop Soviet expansionism in the Third World were exceptionally bitter. The battlegrounds ranged from Angola and Grenada to Afghanistan and Central America. Reagan’s top team — William Casey at CIA, Cap Weinberger at DOD, and George Shultz at State — understood as he did that if Soviet expansionism could be dealt some tough blows, not only the Soviet empire but the USSR itself would face a political, technological, and financial challenge it could not meet. Few officials besides Ronald Reagan predicted the collapse of the Soviet Union entirely, but every one of us in positions of authority understood the importance of this struggle.