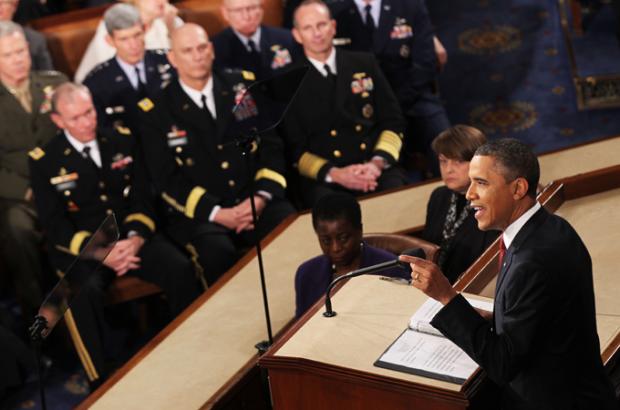 Irvine, CA - How do you judge a State of the Union speech that begins with a lie?

There was any number of anecdotes or stories with which President Obama could have begun his talk to the nation. But he decided to begin with the most overused trick in any leader's rhetorical arsenal - to celebrate the military.

"We gather tonight knowing that this generation of heroes has made the United States safer and more respected around the world."

Does the President really believe that the United States is more respected around the world because of its military activities? Did no one point out to him that the morning of his speech, the marine sergeant who led the 2005 assault on Haditha that killed 24 Iraqi civilians received no jail time for his action, same as the seven other American soldiers who were part of the raid? As the LA Times reported in the wake of the decision, "The lack of trial convictions in the Haditha case is likely to further inflame anti-US sentiment in Iraq, as well as fuel criticism by some legal analysts of the 6-year-long investigation and prosecution."
We can thank Obama for completing the withdrawal of most troops from Iraq - he carefully said that there were no troops "fighting in Iraq", but there are still thousands of Americans there, training Iraqis and otherwise engaged in security-related activities. But where is the apology for a war he owes his rise to power on condemning?

1 Comments in Response to State of the Union: Will the US be saved by its military?

The short answer is YES, if they ever get around to actually being asked to actually "defend this country". As for wasting blood and treasure on a bunch of evolutionary throwbacks in the "turd world", who want nothing but our "foreign aid", without doing anything for it but bashing our way of life, we could and should halt those programs, immediately:  Let the "friends of Congress" secure their bloated contracts someplace besides the U.S. Treasury. As for the Congress, if there is a military shortfall, getting rid of half og the House of Representatives would create untold billions of dollars in funds saved from salaries and special interest waste! The money could be diverted to saving the lives of the "throwaway" people the "rear-with-the-gear" fat-cat military and political pundits are so quick to sqander!

Obama is the sencond of our recent Presidents to not know his --- from a hole in the ground about the military - It shows! I can't prove it, but my money is on his gutting the militry as he works to bring our country to its knees. He's pretty much destroyed our economic efficacy; if our ability to defend our shores is sufficiently compromised, we will finally be the biggest banana republic on earth - and fair game!

God might forgive us. History and your children will not!