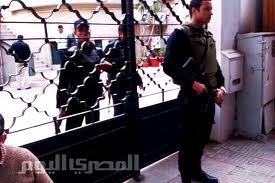 Among those hit by travel bans - one of those targeted called it "de facto detention" - is a son of U.S. Transportation Secretary Ray LaHood, as well as other foreign staffers of the International Republican Institute and National Democratic Institute, officials at the two organizations said.

The United States said Egypt should reverse them: "We are urging the government of Egypt to lift these restrictions immediately and allow these folks to come home as soon as possible," State Department spokeswoman Victoria Nuland said.

"We are trying to get them free to travel as soon as possible, and we're hopeful that we can resolve this in coming days," she said.

A month after police raided the Cairo offices of the IRI, NDI and eight other non-governmental organizations, it raises the stakes for Washington, which had already indicated it may review the $1.3 billion it gives the Egyptian military each year if the probe into alleged breaches of local regulations went on.