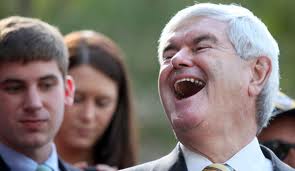 You know it's an ugly, brutish debate when Newt Gingrich of all people turns to his rival and says, "You have to be realistic in your indignation."

Realistic? This from the Great Polarizer of the 1990s who rose to the ranks of House speaker with a militant zeal for defining Democrats as evil and moderate Republicans as fools; the insurgent GOP candidate who denounced President Obama as "the most effective food-stamp president in American history" who wants to transform America into "a brand-new secular Europe-style bureaucratic socialist system;" the resident of tony McLean, Va., who insisted that "elites... have been trying for a half-century to force us to quit being Americans."

Realistic? How about this for realism: In what's become a cliche of the GOP presidential cycle, Thursday night's debate, the 19th of the season and the last, thankfully, for nearly a month, was a victory for Obama. Two days after he delivered a populist State of the Union address squarely aimed at independent voters, and one day after a poll showed Obama's approval ratings rising into safe reelection territory, Romney and Gingrich played to their worst stereotypes:

In the short run, Romney more than Gingrich likely fulfilled his debate strategy by showing fight -- something GOP voters want to see in Obama's rival. "When I'm shot at, I return fire," Romney told CNN after the debate. "I'm no shrinking violet." In the long run, the Republican Party, as represented by the two front-runners, didn't look very presidential.