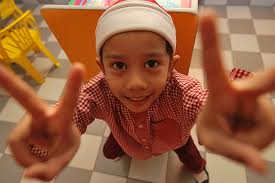 As I write this, my son is running around the house naked, even though I’ve asked him twice to put his clothes on. I can hear the bathroom sink swooshing on and off as he makes a swimming pool for his zoo animals. I weigh getting up and possibly waking his baby sister, who is sleeping on my chest, against the lesser likelihood that he will catch a cold from running around the house naked and wet. I decide to stay put. The swooshing continues.

I wonder how a man named Scott Oglesby would deal with my son’s exuberance, his lack of "respect for authority," his occasional noisiness. Last December, Oglesby, a police officer, was at Stevenson Elementary School in Bloomington, Illinois, when he heard a seven-year-old special-needs boy having a seizure. Oglesby ran into the room where the boy was being restrained by a school psychologist, shouted "you’re giving me a headache!" and grabbed the boy by the throat, holding him up in the air until he turned red, before throwing him down in a chair. Oglesby is now on "restricted duty," but no criminal charges will be filed against him.

I’d like to think that cases like Oglesby’s are rare exceptions. But every week there seems to be another story about someone being shot with a taser over a traffic violation, or for not responding the way the officer wanted them to. There was the paralyzed man thrown from his wheelchair by an officer in a Florida jail; the New York City cop who stopped a woman from driving her dying daughter to the hospital; the mentally handicapped teenager who was tasered to death after waving a stick around; and, in May of 2010, in another increasingly common militarized raid on a family’s home, the shooting death of seven-year-old Aiyana Jones as she lay sleeping next to her grandmother. (There is little doubt as to what happened because the 20 officers who burst into the girl’s home had brought with them a camera crew for a reality-TV show.)