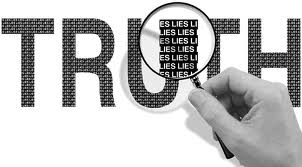 So many are its lies, that narrowing them down to three of the most important is a demanding task. But our current crisis has been chiefly enabled by monetary policy, fiscal policy, and the global military empire. So I have chosen to focus on lies about each: the Federal Reserve, the orchestrator of monetary policy; the U.S. budget, the accounting of government fiscal policy; and a few of the Empire’s war lies. I am sharing just a smattering of this astonishing record of duplicity in these areas, for life is short, or at least far too short to recount all of the state’s lies about each.

Lie #1: The Federal Reserve Is a Bank

Practically everything the government says about banking is a lie. Central banks are not banks. The Federal Reserve, the central bank of the United States, is not a bank.

A bank is a company in the free economy that competes with other banks offering willing customers a safe place to make deposits and earn an interest rate return, while also competing to offer loans from those deposits to willing borrowers.

Central banks are government-created bureaucracies that do nothing of the sort.

The Federal Reserve is typical of central banks. It is not a free market institution in which people willingly make deposits. Instead, it wields monopoly power over actual banks. In place of managing deposits and loans of its own, it creates money out of nothing by a variety of means including debt monetization, in which it buys government debt by simply creating a credit in the account of a commercial bank with nothing more than a booking entry. This is an act made possible only by the state’s grant of a legal monopoly empowering the central bank to do what, if done by a private bank, would be a crime called counterfeiting.

Central banks thus have the ability to unilaterally boom and bust their economies at will. And they have done so throughout their history, either to the benefit of the commercial bank cartels, in response to political pressure, or because of outright economic ineptitude .