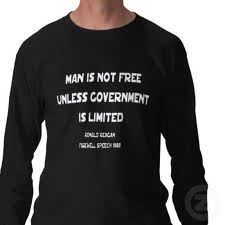 As clear and simple as these facts are and have always been, grasping them seems to be beyond the abilities of presidents, congresspersons, supreme court justices, and professors of "Constitutional Law" at the most prestigious institutions.
In recent times the abuses of these people (what the Founders would have described as "usurpations" justifying rebellion) have run amuck, distorting an already wounded constitution beyond recognition. Ambition, rent-seeking, willful historical ignorance, deceit, ideology, and the lust for power (which the Founders hoped to guard against) have rendered the real constitution of our forefathers virtually null and void. This has prompted serious citizens to re-expound what the Constitution for the United States is supposed to be. There have been good books in this vein by Professors Thomas Woods, Walter K. Wood, and Kevin Gutzman, and by William J. Watkins and Judge Andrew Napolitano.

No one can argue with the 3 most powerful words ever written in the American Constitution,

I believe “We” all need to come together and be involved. Nothing will change until actively participate in our own self-determination. That is what America once stood for – I for one, would like to see more of our countrymen and women wake up, stand up, and unite together.

I invite you to visit http://www.united-we-stand.net and peruse the various designs of America’s 50 States including in its form of United States - “AMERICA.” I ask graciously that you share this with others who may see the intrinsic value of the message -

The two most prevalent forms of communication are audio and visual. Unite them for a more powerful message.

Is a simple marketing tool to deliver a message to millions on a vehicle of symbolic visualization – a “T-shirt” – Stars, Stripes, and individual STATES.

If you want people to rally behind a message, you need strong visualizations.  Find a simple form of delivery and it can spread like wildfire. Keep the message constant and people will begin to believe it. Like a heartbeat… it has to be constant and carry a strong beat to stay alive. The message will carry more weight when it is backed by “numbers” – one million supporters carry more weight to any issue than just a few voices.

The American persona was founded on a declaration of unity. People standing together to be counted is a very powerful civics lesson - The understanding that “together – United” We can make a difference – United, We can be heard. Visuals can turn up the volume on any message without damaging an eardrum. A visual can become a powerful magnifier.

Consider a rally of 100-1000 people on the steps of your state capitol or the ‘White House.” There will be a large number of hodgepodge and mismatched articles of clothing that speaks psychologically of confusion. Dress those same people with “United We Stand!” t-shirts and the rally becomes a more powerful message. “United We Stand!” behind this bill, this event, this candidate…etc. It loudly proclaims – “We” come in numbers because believe in the message and together “We” have found common ground.

is because it is within foreign

so it can only implement

"Bankers' Blueprint", but the

The Point Of No Return