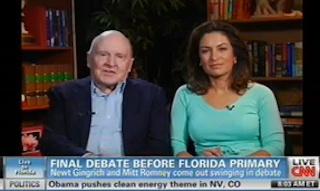 Former GE CEO Jack Welch and his wife Suzy appeared on CNN’s Starting Point and told host Soledad O’Brien that they were calling upon Ron Paul to drop out of the race — although all of their kids were for Ron Paul!

“You know, Ron Paul’s followers are not party regulars. He’s not a party regular. He really has these very, very impassioned followers. All four of our children are huge Ron Paul followers,” Suzy acknowledged. “So we’re living with this.”

Suzy Welch’s startling admission that they were asking Paul to drop out in spite of the fact that he had captured the imagination of her own kids ended up overshadowing the rest of the interview. The revelation caught the attention of CNN contributor David Frum, who was sitting on set, and tweeted incredulously about the news.

11 Comments in Response to Former GE CEO Jack Welch Says Ron Paul Should Drop Out: ‘He’s Not A Party Regular’

Well, he does have a point. Nearly all of the candidates demonstrate by word and example that they agree with very little of the 2008 GOP platform. They have essentially abandoned their platform. Ron Paul agrees with most of those points in the platform but carries them to their logical requirements....a liberty envisioned by the Founding Fathers before they were perverted by the politicians. The Republican Party is no longer the party of liberty. Ron Paul belongs with the Libertarian Party or a new third party Liberty Party. The GOP leadership has made it clear that people who are truly concerned with liberty and actually want to do something about it are no longer welcome within the GOP. GOP has essentially become the economic arm of the Progressive Party while the Democratic Party has become the social arm of the Progressive Party...two sides of the same coin. No wonder both parties hate Ron Paul so. His philosophy is a direct threat to their survival.

What a patronizing bunch of nonsense. The more I listen to Ron and read his books the rest of the candidates sound like a bunch of crazy people. They darn sure don't understand Paul supporters. If Ron isn't the R candidate I really don't care who the nominee is and don't bet on me voting for a D or an R.

Yeah well for starters Dr. Paul has the same wife he had from the sixties.  That right there disqualifies him from being a party regular.  Funny how I was wondering where this dinosaur has been lately.  Probably running errands for his gold digger wife.  haha

Some industry analysts claim that Welch is given too much credit for GE's success. They contend that individual managers are largely responsible for the company's success.[12] For example, GE Capital, under Gary C. Wendt, contributed nearly 40% of the company's total earnings while NBC, and Robert C. Wright worked to turn the network around, leading to five years of double-digit earnings growth. It is also held that Welch did not rescue GE from great losses as the company had 16% annual earnings growth during the tenure of his predecessor, Reginald H. Jones. Critics also say that "the pressure Welch imposes leads some employees to cut corners, possibly contributing to some of the defense-contracting scandals that have plagued GE, or to the humiliating Kidder, Peabody & Co. bond-trading scheme of the early 1990s that generated bogus profits".[6]

Welch has also received criticism over the years for an apparent lack of compassion for the middle class and working class. By his actions during acquisitions and wholesale shutdowns of GE business units Welch proved that his technique of only keeping the units your company is "good" at you can maximize ROI for the short term. In the meantime (as of the 1990) thousands of employees have been removed from the rolls of GE. Welch has publicly stated that he is not concerned with the discrepancy between the salaries of top-paid CEOs and those of average workers. When asked about the issue of excessive CEO pay, Welch has stated that such allegations are "outrageous" and has vehemently opposed proposed SEC regulations affecting executive compensation. Countering the public uproar over excessive executive pay (including backdating stock options, golden parachutes for nonperformance, and extravagant retirement packages), Welch stated that CEO compensation should continue to be dictated by the free market, without interference from government or other outside agencies.[13] In addition, Welch is a vocal opponent of the Sarbanes-Oxley Act of 2002.[14]

At the time of his retirement, Welch received a salary of $4 million a year, followed by his controversial retirement plan of $8 million a year, which included GE's $80,000 per month luxury apartment in Trump Tower (New York City), free food and wine, access to a $300,000 per month B737 corporate jet, VIP tickets to the Metropolitan Opera, the Knicks, Wimbledon, the US Open (tennis) and the Red Sox, an office and a secretary in the GE building and a limousine with driver.[10] In 1999 he was named "Manager of the Century" by Fortune magazine.[11]

There was a lengthy and well-publicized succession planning saga prior to his retirement between James McNerney, Robert Nardelli, and Jeffrey Immelt, with Immelt eventually selected to succeed him as Chairman and CEO. Nardelli became the CEO of Home Depot until his resignation in early 2007, and until recently, was the CEO of Chrysler, while McNerney became CEO of 3M until he left that post to serve in the same capacity at Boeing.

...then they attack you... ;-D    'especially for corrupting our kids with your strange ideas you dangerous bastard you.'

Why can't they leave him alone? The Main Stream Media leaves him alone, why can't they? Sometimes MSM and CNN moderators are too bias in ignoring him they are not even aware that he is participating in the debate. They just leave him alone standing there while Santorum, Gingrich and Romney are debating. They should let him and supporters have some fun, shouldn't they?

No need to call him to drop out. He always drops out.

Thank God that Ron is not one of those 'regulars'.

Now we know why Ron receives so many false flag fringe media attacks.

What in the world is a Republican Party regular? There are thousands upon thousands, even millions, of Americans who have voted Republican for years. The vast majority of these have hardly ever attended a RP party meeting. Most don't really know what the RP stands for, or how the Party has changed over the decades.

When you have little people, everyday folks, who are Republicans, and are losing their houses and their jobs and their pensions and their whole life that they worked so hard to build over many, many years and much suffering... and they are losing it to Republican Party supported, constitutionally illegal, income taxes, central banking, Democrat-style social programs... WHO IN THE WORLD WOULD YOU SAY ARE PARTY REGULARS?

The whole Republican/Democrat system is a crock. What do I mean by a crock? I mean a crocodile that is chewing up Americans by the thousands, and swallowing down into the grave of its big fat belly.

Pre-mid-1900s, the Republican Party wasn't like this. It was something you could be proud of, more or less... at least on the outside. Sure, they didn't put anybody into office who got rid of Constitutionally illegal central banking and income taxes. And true, they adopted more social programs as they years went by. But at least back then, they talked some of the Constitutional type talk.

THE BIGGEST THING THE RP HAS DONE CORRECTLY IN THESE YEARS, IS TO BECOME LESS HYPOCRITICAL. THEY ARE, NOW, SHOWING THEMSELVES TO BE WHAT THEY TRULY ARE INSTEAD OF HIDING IT HYPOCRITICALLY... SOCIAL-PROGRAM PROMOTERS, JUST AS BAD AS THE DEMOCRATS.

Ron Paul is way more of a Republican Party regular than any of the RP's own big-shots anywhere in the nation and the world. Why? Because he supports in a real and direct way, the basic things that the millions of little republicans voters do... freedom and prosperity for Americans, rather than individual and national destruction.

Vote Ron Paul 2012. And if the Republican Party won't accept him as their nominee, if he is not found on the ballot when voting time comes, if he formally is forced out of the race, WRITE HIM IN ANYWAY. Why? Because, if he wins, he will accept the job, and America and the world will be better off for it.