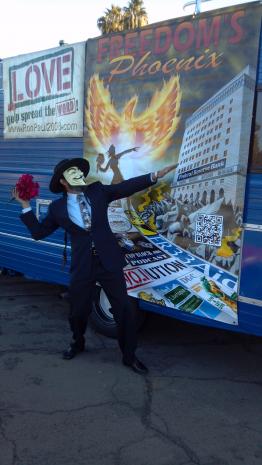 By Ed Vallejo
As a 'new' Precinct Committeeman in the Arizona Republican Party, I have no 'vote' in current Party matters.  Because of this, I did the next best thing I can do that is one step above 'attendence' - I volunteered to help the Party stage the event.
My first post was at the Maricopa County Convention a month ago.  I showed up early at 7:00 a.m., and went through the training process.  I was posted in front of the proxy table, checking ID's against the proxys held.  Once Credentialing was closed for the last time, everyone went into the 'Sanctuary' (the event was held at a Church) except one or two people, and George Teegarden, at the laptops used for coordinating the process.
He kind of looked surprised when I was there at his heels, intoducing myself and asking him if he needed assistence further.  He told me that he needed to take up all of the cords and equipment, and relocate to the area where the votes would be scanned in and tallied.
Jackpot.
Being tech-savvy, my proficiency speeded up 'the process' and did my best to accomplish the tallying of the votes for the bylaws, and the Committemen-at-Large.  Quickly.
Towards the end of the day, I started inquiring about the Straw Poll votes.  These are the ballots with the Presidential Candidates and some local Candidates were being polled on their favoritability.
I was told "Oh, we aren't going to count those now - I can do them later in my garage."  I really wanted to get those ballots counted in the presence of witnesses, but since I had no vote in the box, and I was BRAND NEW - I let it go, and watched him and Rob Haney (GOP County Chairman) drive off with them in the back of an SUV.
I watched and searched for several days looking for the 'Official results', and finally got them. 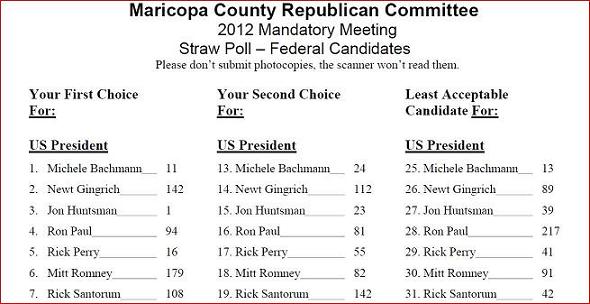 These ballots were dispensed via 'the process' unmonitored by anything other than 'the process', at no cost to the voters.  No real telling who provided who with how many ballots, other than the results stating '569 ballots counted'.
Segue to yesterday.
I arrived at the 'State Convention' to find out that it wasn't what I thought.  In the course of the day I found out that this was a 'Mandatory Meeting' where certain Officers were to be elected, but the actual State convention would be later in the year, when Delegates would be 'chosen'.
Once again, with no 'vote', I was welcomed by George heartily, and went to work.
Towards the end of the day, with the event almost over, each request on the Straw Poll activity was responded with 'they are still taking votes'.  I'm not a rich man by any standard, and I was holding my dear ten dollars (that's what each vote costs - which goes to benefit the Republican Party) for the 'Last Chance to Celebrate' event the Ron Paul MeetUp Group of Phoenix were having for those supporters to have a nice buffet at Dillons on Central a couple of miles from the Meeting, so I didn't 'vote'.
Just before the Meeting adjourned, as George and I and Buck Shull (a good friend and Founding Member of the RP Group that I had 'recruited' to aid in the vote tally) were standing outside the counting room chatting, lo and behold what do we see but a nice lady walk up with the straw poll votes and ask if we can count them!  Yesss!
We immediately flew into action.
It was close there, I tell you; an Official kept coming in to see if we had the results because they were fixing to adjourn inside, but we got it done in time.  The results?
Rick Santorum - 8 votes.
Mitt Romney - 17 votes.
Newt Gingrich - 20 votes.
Ron Paul - 256 votes.
Just before we started the count, I said "shouldn't we get a few more witnesses in here so they can monitor like the others did in the previous races?" (there were 4 or 5 earlier) she said "well, I'm a Gingrich supporter, and he's for Mitt Romney, so there ya go!"
I agree.  So there ya go.
Ed

This is probably old news now but I just became aware of this site and the post about the Republican straw polls. The "process" is no secret.  Ed, dude, all you had to do was ask. Every year the Republican Party at state and county levels have an "organization' meeting where some portion of the officers are elected.  We don't turn over everyone at the same time in order to keep a little "corporate memory" as to the details of the operation.  Every member (Precinct Committeeman) is made aware of the meeting in a "Call" letter that's sent out at least 10 days prior to the meeting.  In the case of the County meeting, the straw poll was sent out with the Call.  Each PC, some 3460 of them, got a Call and it contained one straw poll ballot.  The specs of the scanner program are such that copies made of the ballot are unreadable because copiers aren't precise as to the position of everything relative to the page edge so we're confident there weren't multiple votes by folks as there were at the State meeting. We had two dozen or so ballots mailed in and the rest deposited in the box at the meeting. Rob and I ran the ballots through the scanner here at the house the evening after the meeting and posted the results on www.trugop.org as was noted in the Call letter.  I think we got some interesting information from the MCRC poll and also from the AZGOP poll. MCRC gave us a snapshot of candidate support across the Party and the AZGOP poll showed me for one the strength and enthusiasm of Ron Paul's supporters.

Now, a note about money.  The Republican conservative grass roots has become aware that if we want the Party to reflect our views we have to support it, financially and locally. You have no idea how much effort and ca$h went into giving us the conservative Party leadership we have here in Arizona. The national level RNC is good for getting Republicans elected in the general elections but it's less than welcoming to strong conservatives or to our movement in general. That's where the big buck donors are giving us moderates and telling us it's the only way to win.. Wealthy folks who donate large bucks expect their views to be attended to also and sometimes their views don't exactly mirror those of us down in the grass.

A few thousand of us donating ten to fifty bucks quarterly here in Arizona and working in the trenches to see aware constitutional conservatives, not "moderates" elected to PC positions and then moving up in the Party ranks will eventually steer the rest of the Party over to our side. You saw what's left of the CPUSA take over the Democrat party all the way to the top in less than 50 years. I for one want to see a "Reagan" come along more often than every century or so but as long as we're content to sit around and let the fat cats support the Party financially it isn't going to happen.

All I know is that after becoming "familiar" with the local breakfast club, I learned that people are DEFINITELY FAKING BEING RON PAUL SUPPORTERS THERE... and attempt to thwart the success of this party.

Kim Dyer  I take this FACT to my grave.

This is how the AZGOP put it in their own words:

"If you want to set the media message for the second largest Presidential Primary between the Mississippi River and California, you will want to participate in this special opportunity!"

Hi Ed, Thanks for writing this. I am a new Committeeman and voted (for RP) at the County meeting but didn't get to go to the State meeting. I too was amazed at the difference in the voting and the fact that there were so many RP supporters at the County meeting and he got so few votes. It seems like there were more people with Paul stickers than he got votes. As a recent change from libertarian to republican, I would be very disappointed to think that my party leaders might be lying to me. Maybe we can get our hands on those ballots. I'll talk to my precinct captain, also a RP guy. Tyler

I spoke with George Teegarden, and he says that the ballots scanned in were available for review if that is your desire.  See, the County Poll wasn't as stringently monitored as the State Poll; there's no telling how many ballots were handed out to whom, and when.  The State Poll was conducted in one place, with ballots being handed to people paying $10 each - in front of witnesses.  Ergo - the disparity of the counts.  I guess the Mitt, Newt, and Rick people weren't so ready to hand out their hard earned cash for their Candidate, but they can vote down Ron with all the free ballots they can get their hands on.

Remember one very important thing. Ron Paul for President is not the answer or the end. Rather, it is the beginning.

If he wins, we need to double and triple our efforts to educate ALL Americans about the corruption throughout both houses of Congress. This corruption involves the continual breaking of their Oaths of Office.

There might be nothing wrong with a central banking system, if it were not the mandatory, only, banking system. What makes it wrong is that it is against the spirit of the Constitution.

Ron Paul will need all the help he can get to fight the corrupt Senate and House so that the Government goes back to making nothing but gold and silver to be money, and that this money is controlled by the Treasury rather than some central Federal Reserve Bank.

Thank you for standing up and getting in on this so it was done in a fair manner.  We trounced those Grinch and Rombies!  Let's make sure this momentum carries over to the Republican Primary!

No sir (or Ma'am) - there were TWO polls - the one in the PDF is the first you refer to, which was the County Poll one month ago.

The second was yesterday, at the State level, which I did get to help count.

I'm not sure I understand this.  Are you saying that the Republican party officials counted the straw poll votes in private and posted these results, but when you counted them yourself, Ron Paul had won overwhelmingly?