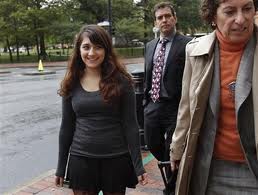 Bring back the witch burnings! The brouhaha involving Rhode Island high school student Jessica Ahlquist, 16, who requested her school remove a prayer banner invoking '"Our Heavenly Father," serves to illustrate how the ideals of the American Founders have been trampled and corrupted by religious fanatics in this country.

Ahlquist made a simple request to preserve what is called the "separation of Church and State," based on the "Establishment Clause" of the American Constitution. For her efforts, she's been viciously attacked with all kinds of insults, hate speech and threats of violence, including death, with a Rhode Island state representative suggesting she's an "evil little thing."

However, it is Ahlquist's Constitutional right to attend a secular public school. If others wish to attend religious schools, there are plenty of those in this country. Our public schools must be kept secular, teaching religion only from a dispassionate and uninvolved perspective. Otherwise, religion must be barred from public schools. No proselytizing, no school prayers - nada.

This Constitutional "wall of separation" was further solidified by a woman named Vashti McCollum, who sued her local school board over religious indoctrination and won, in a Supreme Court ruling in 1948:

Vashti McCollum, a self-described humanist from Champaign, Ill., challenges the practice of allowing students in public schools to attend voluntary religious instruction during school hours, on school property. When her son and other students chose not to attend the classes, they are left to study alone in an empty room. McCollum sues the local school board; her family is subjected to harassment and hate mail; the family cat is lynched. The case reaches the Supreme Court, which rules 8-1 in favor of McCollum, saying the practice of holding religious classes on tax-supported property violates the Establishment Clause.