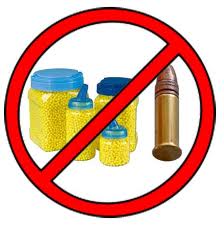 In an end-run around an all out gun ban, the New Jersey Assembly Law & Public Safety Committee is set to consider legislation that would ban ammunition under the auspices of protecting police.

The language seemingly targets the already prohibited ‘armor piercing ammunition’ but would encompass any ammo that is deemed to “pose a threat to the safety and well being of law enforcement.” Ammoland is reporting that “Common hunting, target, and self-defense ammunition would be subject to ban, along with BB’s, airgun pellets, and non-metallic ammunition like plastic airsoft pellets.”

The NRA concurs with Ammoland, reporting that while the language of the bill seemingly deals only with handgun ammo, the actual legislation could include the ban of many rifle ammunition, particularly as there is a bleed over between cartridges that work with both types of firearms:

The bills would also “criminalize the use of a defaced or stolen firearm,” which would again, through vague and ill-defined language, deceptively restrict the lawful ownership of virtually any modified or restored firearm.

2 Comments in Response to New Jersey Assembly aims to ban all handgun, some rifle ammo

There is no one wanting to enslave us!  In spite of the endless carping about "wasted tax dollars" not one branch of govern-ments spends a dime on anything and pays no one for any-thing.  WHY should our misleaders spend money when all of us risk our lives for strips of paper that have not even prom-ised payment for 48 years? 30 years ago, the head of the John Birch Society was wanting us to fear an "abject slavery" in the distant future. We were slaves when we stopped being paid with dollars of money and began to pretend that we were paid with promiseless paper.  Taxes can be paid with nothing less than silver coins.  No one wants us to pay taxes but a great many believe we pay taxes with paper and our Marxist misleaders want nothing more. "None are so hopelessly enslaved as those who falsely believe they are free." Johann W. vonGoethe  www.dorway.com

Protecting the police? How smarmy can politicis get?

How about protecting the people? The cowards and social engineering autocrats and other low forms of  life, who want to enslave the rest of us, will do just about anything their mindles moronics can conjure - This is no surprise; the notion of banning ammo has been around for decades. New Jersey is just another aexample of government run amuck. If I was going to use and abuse a population and had lied to them for years about protecting and serving them, I'd certainly not want them to be able to defend themselves agaionst the goon squads that I planed to turn loose on them...Would you? I'd suggest a remedy, but I'd end up in jail. I'm standing by my premise that this country is in it's final days. When we finally disappear into the dust bin of history, it will be the direct result of the anti-Constitution machinations of the smucks who think that this nation is somehow their personal fiefdom and that all of the rest of us are their slaves and endentured servants. There are sanctions for this treachery:  Don't spend a second of your time or a cent of your money anywhere in the People's Republic of New Jersey! Starve the low-life assholes out of existence, before they kill us all; or, make it easy for their kind to herd us into camps or murder us in the streets. If you don't think this is possible, you'd better get a life. Better yet, read a REAL history book!