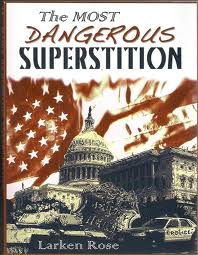 Introduction:  Larken Rose is an outspoken, nationally known proponent of individual liberty, self-ownership and a voluntary society. He lives with his wife and daughter in eastern Pennsylvania and is the author of several books, include The Iron Web and How to be a Successful Tyrant, (The Megalomaniac Manifesto). After spending a year in prison as a result of his beliefs about the US income tax, he just completed another book, The Most Dangerous Superstition. Visit his website for more info (Larkenrose.com).

Daily Bell: Thanks for sitting down with us!

Larken Rose: Thanks for having me.

Daily Bell: Give us some background on yourself.

Larken Rose: Well, I was raised in a conservative, Republican, Christian setting, not just home but the whole town I grew up in. I grew up thinking the Constitution was great, America was great, and that we are free, and everyone else isn't. Where I was raised, it was popular and easy to see the flawed thinking in what the leftist statists wanted, and to bash the silly, stupid, collectivist ideas that socialists were advocating. But it wasn't until years later that I began to see that left-wing statism and right-wing statism are two slightly different flavors of the same gigantic lie.

Over the years, by way of reading things and having discussions and arguments about politics, I went from being Constitutionalist to libertarian, and finally to recognizing the belief in government as not just a bad idea but an insane, self-contradictory superstition, start to finish.

My wife and I sort of made the intellectual journey at the same time, talking about stuff, dragging each other further away from statism and toward freedom. Without giving my whole life story here, we got married in 1992, and had a daughter five years later. We took turns being political prisoners in 2006 and 2007 − me for a year, my wife Tessa for a month. Now we're pretty much full-time enemies of the state, raising our daughter to hopefully be a sane, moral human being while we try to recover from what the parasite class did to us, and try to help other people escape the authoritarian cult indoctrination that almost everyone we know was put through.

Daily Bell: You are known for your stand against taxes and tax collection in the US. But let's ask you some other questions first. You define yourself as a libertarian and have focused recently on the Federal Reserve and central banking generally. Tell us about your concerns.

Larken Rose: Well, I'd qualify that a bit, as a lot of people call themselves libertarians who, if you ask me, really aren't. The Libertarian Party, for example, is a complete contradiction. Libertarianism is based on the non-aggression principle, which is utterly incompatible with any "government" or any political movement. But we can get into that later.

4 Comments in Response to Larken Rose on Taxes, Freedom and Life After Prison

Humanists don't mind contributing to those around us.  But when taxation becomes funding our own demise, I think Larken has a point.  The system needs re-organizing, not a hard one to see.  The words "Tax felon" do not work with me as you try to manipulate readers to see.  I see a hero, who is sick and tired of our tax dollars being misappropriated to evil ends.  Plain and simple.  Why should we fund our own demise?  Don't tell me Panocho and, oh, shocker here, James Vanderville again (the fraud-bloggers).  Why don't you get a conscience and stop with the BS propagandizing.   You are wasting what could otherwise be good space used by intelligent, caring humanists.  I have a problem with evil people taking my money to use against me, don't you?  IF you think the system is working, YOU are mentally ill.  YOU are delusional.  YOU.

@Panocha:  The article you site is by "Ivor E. Tower" which translates to Ivory Tower.  Why don't you give us your real name.  Do you really believe that people who identify the modern money-changing of the Bankster RICO cartel really have paranoid schizophrenia?  Or do you profit from this legalized lying to and robbing of Americans who are only now waking up to evil "bloodlines" that have been raping us for centuries?  Your either trying to encite anger and minds to think, or you are truly evil.  Ivory tower concept is it is really easy to get the attention when you have money to wave, but to hold the big corporations (e.g. Sprint, AT&T) accountable, well... that is another matter.  The Ivory Tower system is designed to prevent it.  The Ivory Tower system is designed to label people who see and speak of the truth as mentally ill, and they get locked up using your tax dollars with one of their sleazy Nazi hospitals.  My step mother has a double doctorate in Psychology.  Paranoid Schizophrenia is a creation that the system uses to keep the status quo and discredit those who have figured the system out.  Most are too lazy and brain-damaged from faulty programming in public education and media, entertainment industry to see the truth.  It is literal mathematics called neuro-linguistic programming.  Do some homework people.  They put things like "Ivor E. Tower" M.D. to intimidate whether it be consciously, or subconsciously.  Get it?

I read this “schizophrenic” disorder at: http://www.freedomsphoenix.com/News/104265-2012-01-30-nih-studies-show-fear-of-new-world-order-is-a.htm as well as the above interview of Larken Rose by DailyBell.com. It is long, detailed and exhaustive. I stopped on that tax paragraph part of the interview where he calls taxation as a form of “robbery”. I was interested to know why in the Internet he is described as a “notorious” tax felon. He sort of demanded the Government should respect the individual’s freedom of belief. He was vitriolic in his attack of the Government when it took away his belief -- that he was “forced” to pay income tax to the Authority [IRS] that “robs” him, etc. Obviously in Court, he stood up firmly on his belief that he should not be “forced” to pay taxes. And no doubt he said so in anger, using unprintable words. I can see that such “delusional pattern” of thinking is showing a “recognizable mental illness” which I am afraid might not be incurable.

It is important for the public to know that Larken Rose’s mental thought-process and emotional disorder [chronic hatred of Authority] are revealed in this DailyBell.com interview. An unfounded fear of Order that turned into an extreme hatred of Government, Authority and the so-called New World Order is a "recognizable mental illness" according to studies conducted by the National Institute of Health. I read this in the front page of FreedomsPhoenix.com … and I’m sure you read it too:

Anti-Government-Authority phobia as shown in this DailyBell.com interview is "highly infectious and has an acute onset. Symptoms include extreme suspiciousness, conspiracy-mongering, delusional thought patterns…"