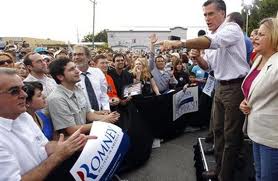 Romney, who has battered Gingrich in a flood of television ads and two debates in Florida last week, opened a double-digit lead over the former House of Representatives speaker in four polls released on Sunday.

Gingrich said the race was closer in Florida than the polls indicated and vowed to fight on beyond Tuesday's vote. Conservatives eventually would rally behind his candidacy and block Romney's nomination, he said.

"I believe the Republican Party will not nominate a pro-abortion, pro-gun control, pro-tax increase moderate from Massachusetts," Gingrich said after attending a Baptist church in Lutz, Florida.

If we are replacing the 'Lamestream Media', why are using their lamestream feeds?  Reuters?  Really?