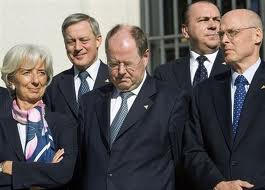 DAVOS, Switzerland (AP) -- Europe's crippling debt crisis dominated the world's foremost gathering of business and political leaders, but for the first time the growing inequality between the planet's haves and have-nots became an issue, thanks largely to the Arab Spring uprisings, the Occupy movement and other protests around the globe.

The mood at the end of the five-day meeting in Davos was somber, and more than 2,500 VIPs headed home Sunday concerned about what lies ahead in 2012. Plenty of champagne flowed in this alpine ski resort - but the atmosphere was flat and the bubbling enthusiasm of some past World Economic Forums was noticeably absent.

Despite some guarded optimism about Europe's latest attempts to stem the eurozone crisis, fears remain that turmoil could return and spill over to the rest of the world. And there were no answers to the widening inequality gap, but a mounting realization that economic growth must include the poor, that job creation is critical, and that affordable food, housing, health care and education need to part of any solution.