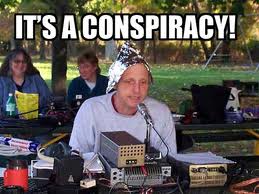 From Social Psychological and Personality Science (SPPS), a journal from the independent publisher Sage Publications, comes an article that has predictably seen wide distribution on the Internet. It implies that those who believe in globalist conspiracy theories are illogical – even downright nutty.

The article is entitled "Dead and Alive: Beliefs in Contradictory Conspiracy Theories" and the thesis of the article is that people who believe in conspiracy theories eventually become so immersed in them and so mesmerized that they do not realize they are holding contradictory beliefs.

"Conspiracy theories can form a monological belief system: A self-sustaining worldview comprised of a network of mutually supportive beliefs. The present research shows that even mutually incompatible conspiracy theories are positively correlated in endorsement." (SPPS Abstract)

"Conspiratorialists" become so distrustful of "government" and "authority" that they will impute any and every kind of malevolence to them.

Thus it is that people can claim, on the one hand, that Osama bin Laden is "dead" and died years ago, while simultaneously claiming that bin Laden remains alive and that US and Pakistan government authorities are not being truthful about him and his physical state.

One thing is for sure. At sometime in the near future we will know if these people are nut jobs or have they really been attempting to alert the public before its to late. When a well-packaged web of lies has been sold gradually to the masses over generations, the truth will seem utterly preposeterous and its speaker a raving lunatic. When that day finally arrives, no doubt that we won't be allowed to come back here and say, "See, I told you so."