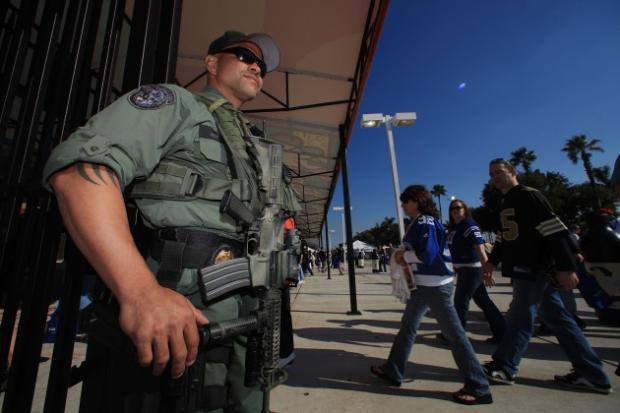 In Indianapolis, local cops and the FBI have set-up a massive surveillance grid ahead of the Super Bowl, slated for February 5th. The heightened security – including a smartphone photo and video surveillance network, the installation of 150 new manhole covers, and the virtual lockdown of a 44-block area – is not in response to a possible attack by al-Qaeda, but will be used to detect “signs of pickpocketing, prostitution or other trouble.”


According to the Department of Homeland Security, the Super Bowl rates as a “national security event” (or NSSE) that may be a target for potential terrorism and “other criminal activity,” possibly of the sort mentioned above.

An NSSE designation allows the feds to have a field day. It puts the Secret Service in charge of event security, the FBI in charge of intelligence, counter terrorism, hostage rescue and investigation of incidents of terrorism or other criminal activities, and FEMA in charge of recovery management in the aftermath of terrorist or other major criminal incidents, natural disasters or other catastrophic events.

Indianapolis Chief of Homeland Security Gary Coons told Fox News that the NSSE rating puts the Super Bowl just below national security events involving the president and the Secret Service. Ratings are based on factors including international attention, media coverage, the number of people the event attracts and visits by celebrities and foreign dignitaries, Coons said.