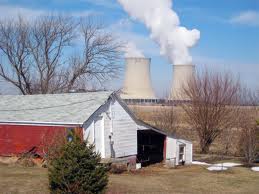 CHICAGO (AP) -- Officials are investigating the events surrounding a power failure at a nuclear reactor in northern Illinois, where steam was vented to reduce pressure after it shut down.

After the shut down Monday morning at Exelon Nuclear's Byron Generating Station, operators began releasing steam to cool the reactor from the part of the plant where turbines are producing electricity, not from within the nuclear reactor itself, officials said. The steam contains low levels of tritium, a radioactive form of hydrogen, but federal and plant officials insisted the levels were safe for workers and the public.

Diesel generators were supplying the reactor with electricity, though it hasn't been generating power during the investigation into what happened. One question is why smoke was seen from an onsite station transformer, though no evidence of a fire was found when the plant's fire brigade responded, U.S. Nuclear Regulatory Commission spokeswoman Viktoria Mitlyng said.