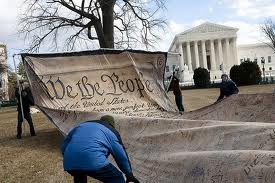 APPLYING TO    THE CONGRESS   OF  THE UNITED  STATES  TO   CALL A   CONVENTION    FOR PROPOSING    AN  AMENDMENT TO  THE CONSTITUTION  OF THE UNITED STATES TO   PROVIDE THAT AN INCREASE   IN  THE
FEDERAL  DEBT  REQUIRES   APPROVAL  FROM A  MAJORITY  OF THE LEGISLATURES  OF THE SEPARATE  STATES.
CLICK HERE for and online PDF of bill
CLICK HERE for article, 'States Should Enforce, Not Revise, the Constitution!' (Online PDF)

From The John Birch Society:
Stop Arizona’s Con-Con Call
On Monday, January 9, 2012, a bill, Senate Concurrent Resolution 1005, was introduced in the Arizona State Senate. Bill SCR 1005 applies for the Congress of the United States to call a convention for proposing an amendment to the U.S. Constitution to provide that an increase in the federal debt requires approval from a majority of the legislatures of the separate states, also known as a national debt relief amendment (NDRA).

However noble this proposed amendment to the U.S. Constitution may be in its attempt to balance the federal budget, grant the President the power of a line-item veto, and the adoptions of budgets to be submitted and adopted every two years rather than every year, the calling of a general Article V convention is not the proper route that should be taken to make or propose such an amendment to the Constitution.

The last time that such a convention was convened was in Philadelphia in 1787 when General George Washington, James Madison, and the various delegates from the thirteen United States assembled to propose amendments to the Articles of Confederation -- the law of the land at the time.

Although called to strengthen and centralize the national government, the Philadelphia Convention of 1787 was convened to amend the Articles of Confederation rather than replace them. We were lucky then, seeing as the convention resulted in such an excellent Constitution. We were also fortunate to have had enlightened statesmen and drafters, such as James Madison, who understood the Lockean virtues and principles of individual liberty and limited government. Looking back, who among us today comes close to exemplifying the virtues of our Founding Fathers?

The answer is too few and far between, if any at all. The proposal for a second Constitutional Convention (Con-Con) promoted by so-called conservatives, would likely result in a runaway convention in which extremist or revolutionary elements could highjack the convention and alter the Constitution to include harmful amendments, such as “second generation” or “positive” socialist rights while curtailing our nation’s traditional negative rights that protect our liberties from the government.

What we need is not for the States to revise the Constitution, but rather to restore and enforce it as our Founding Fathers originally intended (for more information, click here for a free PDF article download).

We should not risk the passage of a Con-Con call no matter how appealing it may be. You now have the ability to help stop Arizona from calling upon Congress to authorize such a convention. Contact your State Representative and State Senator now and urge him or her to oppose the passage of SCR 1005, and if it does come to a vote on the floor to vote NAY on the bill.

Your Friends at The John Birch Society