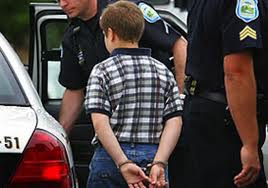 With each passing year, the difference between America's prisons and America's public schools becomes smaller and smaller.  As you read the rest of this article, you will be absolutely amazed at some of the crazy things that school children in America are being arrested for.  When I was growing up, I don't remember a single police officer ever coming to my school.  Discipline was always handled by the teachers and by the principals.  But today, there are schools all over the country that have police officers permanently stationed in the halls.  Many other schools will call out police officers at the drop of a hat.  In the classrooms of America today, if you burp in class, if you spray yourself with perfume or if you doodle on your desk, there is a chance that you will be arrested by the police and hauled out of your school in handcuffs.  Unfortunately, we live in a country where paranoia has become standard operating procedure.  The American people have become convinced that the only way that we can all be "safe" is for this country to be run like a militarized totalitarian police state.  So our public schools are run like prisons and our public school students are treated like prisoners.  The United States has the highest incarceration rate in the world by far, and our schools are preparing the next generation to either "do time" in the prison system or to live as good little slaves in the Big Brother prison grid that is being constructed all around us.  But what our schools are not doing is giving these children the critical thinking skills that they need to live as free citizens in a nation that used to be "the land of the free and the home of the brave".

Of course very few people would deny that the character of American schoolchildren has changed dramatically over the decades.  Back in the 1950s, some of the biggest school discipline problems were gum chewing and hair pulling.  Today, kids bring knives, guns and drugs with them to school.  Gang activity is rampant in many of our schools and in some schools kids are even having sex in the school bathrooms.

So there is definitely a discipline problem in our schools.

Oh, what's a little arresting of kids in American schools? It's nothing, considering that we've already murdered over 50 million of them with abortions.

I'd like to tell you why we have these indoctrination centers better known as public schools.  Karl Marx either read the Bible or at least the Book of Proverbs. "Train up a child in the way he should go and when he is older, he will not depart from it." Pr. 22:6. Train him up deceived and misled, when he is older, he will remain deceived and misled as well as indoctrinated.  Marx made "free education in public schools" one of the ten planks of his Communist Manifesto that has superseded the Bill of rights. Go to court on tax charges and see that the Bill of Rights has no value to you. I have  con-cluded in the past year that the press, president, preachers and professors tell us only what they want us to believe. If they told us all that we need to know about the illusions known as "taxes", our money that Keynes called "worthless" would become useless money. They will not tell us that all we have in banks is numbers or that our misleaders have no need for money when all of us will risk our lives for more numbers, and that taxes cannot be paid with paper. Nor all who work for strips of paper including soldiers and suppliers must pretend that we are paid with paper, or there would simply be no wars! Mass mind control was an art in old testament times when the only means of mass communications was a trumpet. How many means of mass communications do we see today? There are far too many to count. Are we British subjects?  www.morpix.biz/wxyz

You are right, Hawkeye.

But a lot of it is because the parents don't care. They are working, or partying, or snorting, or just plain drunk all the time. And it this apathy and love of pleasures that are cementing their slavery in place, as the iron fist of the Government grows ever stronger, and closes ever more tightly around them.

This is happening simply because the Parents are Ignorant Cowards that don`t really give a damn about their own children.Damn! some of them even work for "Monsanto".