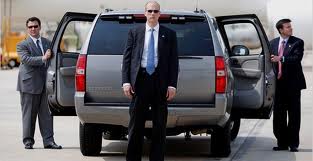 Secret Service protection is being given to the campaign not because of a specific threat but because of the increase in crowd sizes as the primary season has progressed over the past few weeks, according to the sources, who refused to be identified because they don’t have authority to comment on such matters publicly.

According to a federal law enforcement officials Romney’s campaign, which has long traveled with private security of its own, did request Secret Service protection. However sources tell ABC that the campaign did not make the request, but was approached about the additional security steps in the weeks following the New Hampshire primary.

The Secret Service is charged with protecting presidential candidates in addition to the president himself, and providing protection to a candidate before he secures a nomination has become fairly common. Such decisions are made by the Department of Homeland Security, in consultation with congressional leadership.

Officials with the campaign an

I am looking for Facebook support, but the system blocks me from searches...  I am wearing a white Porsche hat looking down.  I really want to share ideas without dominating this news site.  My email address is:  Kimpanelli1007@gmail.com.  I would like to email with you who wish to organize and exchange information that will preserve our freedoms and spread the truth.  Through this, we can get a bit more done.  Kim P.S.  Please make sure to reference that you read this in the re: line.

Mitt Romney will sign away even more of our privacy for the Mormon quest for one world banking domination.  They already accomplished this without a Mormon president. (Which is Mormon prophecy.  I really do believe that Mormonism is a Jesuit Vatican created Banking breeding mind-control cult.

In today's and probably for many years' political climate, PRESIDENTS ARE SELECTED, NOT ELECTED.

Donna Hancock, you impress me.  I always look to see who is posting something great, and I often see YOUR name.  Thank you for what I see is quite noble and humble power behind the throne.   The fact that Mitt is the only one getting this gov sponsored protection only proves that they already chose their candidate if Obama won't continue.