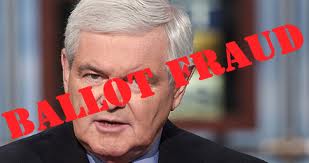 Nonetheless, The BRAD BLOG has received confirmation from two different state agencies that the 1,500 alleged cases of ballot petition fraud said to have been carried out on behalf of the Gingrich campaign, in their unsuccessful attempt to qualify for the Republican primary ballot in Virginia, are now being carried out by the state Attorney General’s office.

In late December, after Gingrich had failed to turn in enough valid signatures to qualify for the Virginia primary ballot, he was caught on video tape telling a supporter in Iowa that the reason for the failure was due to a campaign worker who created 1,500 fraudulent signatures.

The former Speaker of the U.S. House of Representatives downplayed the incident, by explaining to the woman that the entire affair was “just a mistake,” after they had “hired somebody who turned in false signatures.”

See my several comments at