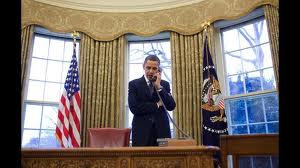 White House spokesman Jay Carney rebuffed questions Tuesday about whether President Obama had violated intelligence restrictions on the secret U.S. drone program in Pakistan when he openly discussed the subject the day before.

Obama, speaking Monday at an online town hall sponsored by Google, twice uttered the word “drones” as he explained their precise and “judicious” use against al-Qaeda targets. Asked if the president had made a mistake, Carney said he was “not going to discuss . . . supposedly covert programs.”

On Monday, Obama was responding to “Evan in Brooklyn,” who said that the president had “ordered more drone attacks in your first year than your predecessor did in his entire term.”