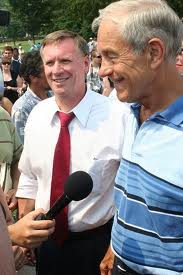 Recently it was announced that a number of Evangelical Christian leaders met in Houston to choose their candidate for president. This group decided to endorse Rick Santorum, a decision that mirrors your own the week of the Iowa caucuses. It is my hope that the two of you will reconsider your choice of candidates this election season, and instead of backing Santorum, use your influence in support of Dr. Ron Paul. Below I've outlined many very important reasons why Dr. Paul is the best choice for Evangelical Christians.

I'll begin with an issue very dear to our hearts: the subject of children. A family man, Dr. Paul has been married to his wife Carol for more than fifty years, and together they have five children, eighteen grandchildren, and two great-grandchildren. As you may know, Dr. Paul is a medical doctor, specializing in obstetrics. During his career in the medical practice he's helped deliver over 4,000 babies.

A champion of the unborn, Dr. Paul believes that "unless we understand that life is precious we can't protect liberty." Because he recognizes the federal government never had the proper legal authority to decide the issue, he has repeatedly proposed legislation to strip the federal courts of jurisdiction. Such an act would effectively and immediately overturn Roe v. Wade. Working to appoint sympathetic justices to the Supreme Court who will hopefully overturn that decision at some point in the future has been fruitless thus far. Also, it is constitutionally speaking, not the proper remedy. We can’t hope to have lasting change by circumventing the legal system and forever having the prospect of another court ruling overturn the previous decision.

A constitutional amendment is also, practically speaking, a difficult if not impossible task. Instead, Dr. Paul believes it is with the states that the issue should be dealt. Ultimately however, it is up to the traditional, as well as Biblical, pillars of morality – the Church and the Family – to change the culture. In the Book of Jeremiah we are told that: "…Cursed be the man that trusteth in man, and maketh flesh his arm…." Dr. Paul writes in The Revolution that "[w]e seriously mistake the function of government if we think its job is to [...] supplant the role of all those subsidiary bodies in society that have responsibility for forming our moral character."