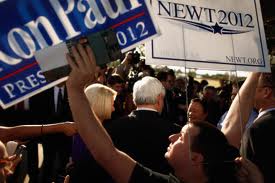 The Ron Paul campaign is demanding that Newt Gingrich pay the medical bills for Eddie Dillard, a Paul supporter whose foot was broken Tuesday after Gingrich staffers intentionally stomped on it.

Campaigning at a Florida polling place Tuesday, Gingrich was greeted by Dillard, who held his Paul sign as Gingrich supporters rallied around their candidate.

Gingrich staffers were not pleased with this and, according to a report by Yahoo! News’ Chris Moody, encouraged one another to physically impede the flip-flop wearing Dillard.

One Gingrich security staffer stood in front of Dillard and, according to Moody, “lifted his heeled shoe over Dillard’s bare foot and dug the back of it into his skin, twisting it side-to-side like he was stomping out a cigarette.”

“Just block him!” said another Gingrich campaign aide. “Everyone step on his toes!”

Following the event, Dillard realized that a bruise was forming on his foot.

In a statement released after the incident Tuesday, Jesse Benton, national campaign chairman for the Paul campaign, demanded a swift response from Gingrich.