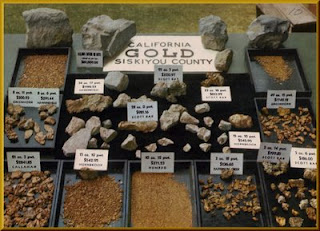 Thieves in Yreka, Calif., made off with $3 million in gold nuggets Wednesday after breaking into the Siskiyou County Courthouse and smashing a glass case that contained a display on the area's mining history, officials said.

The collection in the town near the Oregon border was about the only remnant of the Northern California county’s little-known Gold Rush days.

Founded after gold was discovered there in 1851, Siskiyou County came to be known as “the second Mother Lode,” said local historian Claudia East. “But a lot of times, we’re just kind of left out.”

Sheriff’s officials said surveillance video indicated that two men broke into the case, prominently displayed in the courthouse lobby, about 1 a.m. Officials said they probably entered the building through a back window and rifled through a few offices before smashing the thick display glass.

Sheriff’s spokeswoman Allison Giannini said an alarm that was on the case did not sound.

Yreka police, along with the California Department of Justice, are assisting sheriff’s officials in the investigation.

“These thieves not only stole valuable gold that belongs to the people of Siskiyou County, but these individuals violated the security and sanctity of our courthouse and stole a piece of our Siskiyou County history,” Sheriff Jon Lopey said in a statement.