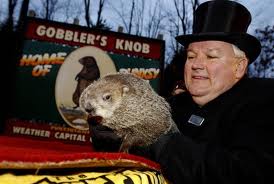 PUNXSUTAWNEY, Pa. (AP) — Pennsylvania's Punxsutawney Phil emerged from his lair to "see" his shadow on Thursday, in the process predicting six more weeks of winter.

But, at this rate, that might not be so bad.

The groundhog made his "prediction" on Gobbler's Knob, a tiny hill in the town for which he's named about 65 miles northeast of Pittsburgh.

Temperatures were near freezing when he emerged at dawn — unseasonably warm — and were forecast to climb into the mid-40s in a winter that's brought little snow and only a few notably cold days to much of the East.

Thursday's ceremony is largely that: Phil's prediction is determined ahead of time by the Inner Circle, a group who dons top hats and tuxedos and decides in advance what the groundhog will predict.