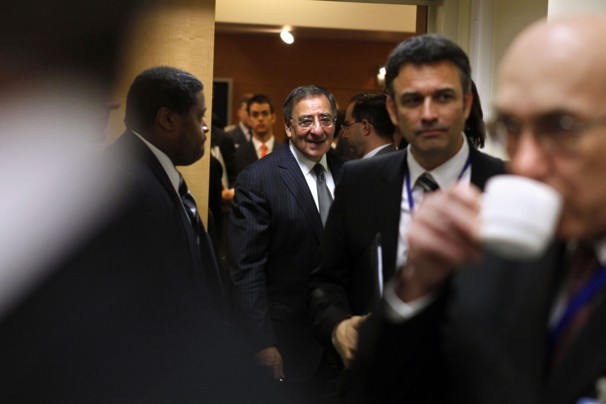 BRUSSELS — The United States hopes to end its combat mission in Afghanistan by the middle of next year, more than a year earlier than scheduled, Defense Secretary Leon E. Panetta said Wednesday.

His remarks reflected a growing sentiment within the Obama administration that its approach to Iraq, where the official end of U.S. combat operations came 16 months before the final U.S. troop withdrawal in December, may provide a useful model for winding down operations in Afghanistan.

Current NATO strategy, agreed to at a summit in Lisbon in November 2010, calls for coalition forces to gradually shift to a training, advisory and assistance role with the Afghan military on the way to withdrawing all combat troops by the end of 2014.

The alliance has yet to agree on the pace of that process, however, and Panetta went further than what some in the administration were prepared to say publicly about their own deliberations. “Our goal is to complete all of that transition in 2013,” Panetta told reporters en route to a meeting of NATO defense ministers in Brussels. “Hopefully by mid- to the latter part of 2013 we’ll be able to make a transition from a combat role.”