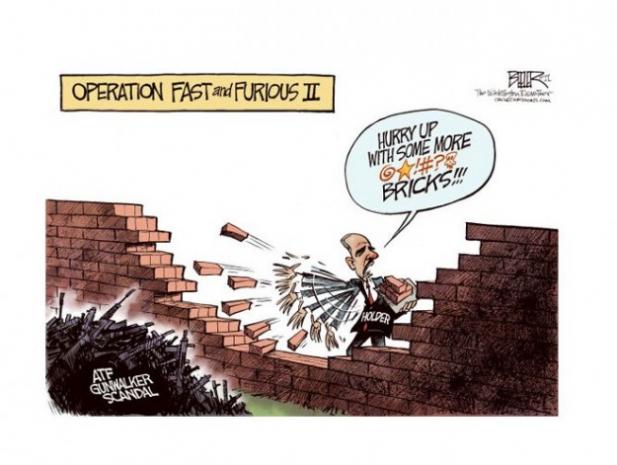 Attorney General Eric Holder vigorously denied a "cover-up" by the Justice Department over "Operation Fast and Furious," telling a House panel investigating the botched gun-running program that he has nothing to hide and suggesting the probe is a "political" effort to embarrass the administration.

"There's no attempt at any kind of cover-up," Holder told lawmakers well into a hearing about whether he had been forthright in responding to requests of the House Oversight and Government Relations Committee led by Chairman Darrell Issa, R-Calif.

"We're not going to be hiding behind any kind of privileges or anything," he said.

The hearing came after Issa and Sen. Charles Grassley, R-Iowa, his Senate partner in the probe, asserted that top Justice officials are covering up events surrounding the flawed gun-smuggling probe.

Issa made the accusation in a letter threatening to seek a contempt of Congress ruling against Holder for failing to turn over congressionally subpoenaed documents that were created after problems with Fast and Furious came to light.

1 Comments in Response to Holder: No cover-up in 'Fast and Furious,' no effort to hide details of the operation

If you can get folks to focus on a cover-up, they just might forget about the real crime. These "Fast and Furious" guys were so bold that they didn't think that they needed to hide anything. They simply went and did what they did right out in the open. And they still are bold. They still are not trying to cover anything up - no cover-up. Guilty as all get-out,